Chivalry? At a dog show? That’s what happened in Cleveland when knights in shining armor came to rescue a fallen comrade at the Crown Classic!

I’ve looked it up. Qualities expected of a knight are courage, honor, courtesy, justice, and a readiness to help the weak. You are about to meet them. 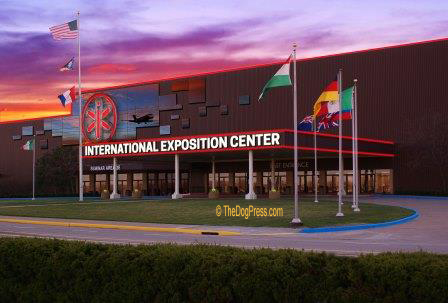 Setting for this classic tale is the Crown Classic Dog Show in the Cleveland IX Center. The blizzard was predicted to arrive noonish in Cleveland so we got up at 5:15, walked the dogs, did a light feeding, packed up the truck, checked out, and arrived at the show at 7:30. You know how it goes, no time for anything but dogs. Forgot the people food…

Our judge was Pat Hastings, a reputable gal who could be relied upon to judge the dogs fairly. We chose to go only the one day so as to minimize the shock of a big show on our puppy bitch. I went in with my 2 year old boy, Irongate’s Love Wins Out and my handler took our puppy bitch, Irongate’s Itrana. We entered the ring with 4 other teams. We gaited, were examined, went down and back, etc. and just before the final go-around, Mrs. Hastings moved us into fourth place; not ideal but a win still could happen. She signaled for all teams to go around.

The class was three-quarters of the way around when without warning my right leg erupted into a searing bolt of pain that caused me to hop once and then drop immediately to the ring mat!

My “hammie” had just locked up and put me into very intense pain. I hit the floor so hard I realized that I was NOT getting up anytime soon. In seconds people surrounded me. I vaguely remember hearing the PA announcement calling for medical personnel to come to Ring 18. There were questions as to my condition; I had lots of them but my mind was so scattered. After some physical examinations I was directed to just stay still. It seemed like considerable time went by as I lay there with waves of pain in my leg. 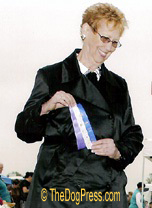 The AKC Judge, Pat Hastings, came over to me and commented “its hell to get old isn’t it” to which I managed a smile and nodded in agreement. She was extremely patient as they administered to me where I fell.

Unbeknownst to me the MB-F Show Superintendent, another MB-F person, the President of the Western Reserve Kennel Club and a couple of their members, an EMT, and several security men had assembled ringside. Pat Hastings checked on my condition several times but never mentioned a word of clearing me from her ring so she could continue in the judging.

After at least 15 minutes of embarrassing attention and agonizing pain, the Show Secretary suggested that I might be carried outside the ring. During all that, the ring steward took my dog’s lead and tried to take him out of the ring. He was very upset at my condition, people hovering over me, and he didn’t want to leave. I assured him it was OK. He begrudgingly obeyed and was brought around to ringside to be near me. 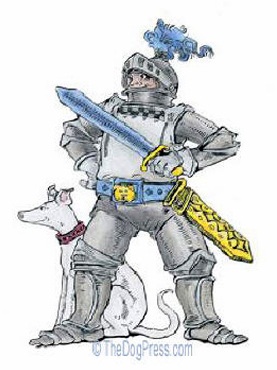 Once moved out of the ring, I was seated in a chair and questioned again as to condition, pain, and other related queries. The Security people and EMTs, like Knights of old, stood by after rescuing me with water to hydrate myself. The EMTs then added Gatorade to help with hydration and Ibuprofen to dull the pain. It seems that in my haste and show prep for the dogs I had neglected myself and dehydration was my diagnosis. Their diagnostic questioning revealed I hadn’t taken the time to eat or drink and on top of that, I had been on a week of cold medication that had dried me up. The medical people had me gradually flex the leg and eventually we stood up and a few moments later they had me walking with strong assistance from the MB-F Super.

The officials asked my better half if we had friends at the show and how we would proceed from here. Cindee is in a power chair and quite unable to lift, assist or drive. She mentioned our friends Ed and Linda Johnson, Bulldog people whom she had seen earlier. They quickly paged the Johnsons. Our handler had taken the puppy Irongate’s Itrana into the ring but I was in such shock and pain I missed it. They told me that our bitch took her class and eventually went RWB to a major.

A cart was brought near so that I could be transported to my vehicle. Our friends, Ed and Linda, sans their shining armor but seeing that I could barely walk, went about bringing my truck to the exit door. Just before the procession to the door began, I was brought another Gatorade as I assured them I could function albeit in a lot pain. The advice was to rise slowly and wait in place for a moment and then take it slow.

The driver of the cart, Frank, was a club member and he was just as caring as all the other folks, making me feel comfortable in such an awkward situation. He drove me right to the door and waited until I was safely on my way to the truck. Ed, Mark, Crystal and Linda saw to it that I got seated in the truck, the dogs loaded in the back, the power chair up on the carrier and strapped in place, Cindee beside me and finally we were on our way home.

The caring attitude of the Western Reserve Kennel Club, the MB-F people and the EMTs, the Security Guards and other helpers was so overwhelming that I cannot thank them enough. The Bulldog people, Ed and Linda Johnson who offered total and complete help, Mark, who lifted CinDee into the truck and Crystal who followed us on our drive to Pennsylvania just to be sure we were OK – thank you, thank you, thank you!

So the message is that while you may have complaints about dog shows remember this story of caring people, who are totally prepared to handle anything and do it professionally and compassionately. This was the Crown Classic but there are Knights in shining armor at every dog show. Oh, and when you are preparing the dogs to show, don’t forget that you need to take care yourself as well. Hydrate!