We were assembling photographs to illustrate the changes that have crept into some breeds and overwhelmed others, when we found Caen Elegans, Ph.D's photos and insightful comments. to those of TheDogPress' pictures (no border) and our breed-related notes.

Be sure to watch the Health Deformities VIDEO in part 3, link below.

The dogs on the left are from the 1915 book, Breeds of All Nations by W.E. Mason. The examples on the right are modern examples from multiple sources. To be able to make an honest comparison, I’ve chosen pictures with similar poses and in a couple of cases flipped the picture to get them both aligned in the same direction. I had to skip some breeds I wanted to include because of the lack of detail in the older photographs. - Caen Elegans, Ph.D.

It seems incredible that at one time the Bull Terrier was a handsome, athletic dog. Somewhere along its journey to a mutated skull and thick abdomen the bull terrier also picked up a number of other maladies like supernumerary teeth and compulsive tail-chasing. - Caen Elegans, Ph.D.

The modern Bull Terrier he chose is actually moderate in head structure.  The increasingly common blocked head has led breeders to pull baby canines which otherwise puncture into the roof of the mouth due to severe crowding and misalignment. The baby incisors are also extracted in order to allow adult teeth to erupt with the least amount of crowding in the unnaturally shortened lower jaw.  Even though the breed standard calls for scissors OR level bite, many breeders tolerate the "parrot mouth" in order to avoid an undershot jaw,  Show breeders have gradually accomplished the "football" head but at great cost to the eyes, mouth and airways. 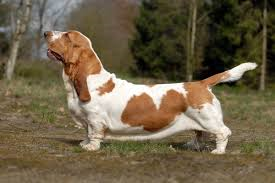 We have inserted a very current photo because although she is a show ring winner, the immense size and weight of today's Basset Hound clearly stresses the spine, elbows, knees, and hock joints.

A shorter face means a host of problems. The modern Boxer not only has a shorter face but the muzzle is slightly upturned. The boxer – like all bracecyphalic dogs – has difficulty controlling its temperature in hot weather, the inability to shed heat places limits on physical performance. It also has one of the highest cancer rates. - Caen Elegans, Ph.D.

A superb athlete, the boxer is bred to have ever-increasing front and rear angulation and a flatter croup for higher tail set.  While this makes for exciting side gait with more "reach and drive" the strength, stability, and agility of this wonderful breed is waning.

The English bulldog has come to symbolize all that is wrong with the dog fancy and not without good reason; they suffer from almost every possible disease. A 2004 survey by the Kennel Club found that they die at the median age of 6.25 years (n=180). There really is no such thing as a healthy bulldog. The bulldog’s monstrous proportions make them virtually incapable of mating or birthing without medical intervention. - Caen Elegans, Ph.D.

The profile we've inserted gives a very clear view of what has happened to the Bulldog head.  We have betrayed all of the "bully" breeds, from Pugs to Pits to Pekes.

The Dachshund used to have functional legs and necks that made sense for their size. Backs and necks have gotten longer, chest jutted forward and legs have shrunk to such proportions that there is barely any clearance between the chest and floor. The dachschund has the highest risk of any breed for intervertebral disc disease which can result in paralysis; they are also prone to achondroplastic related pathologies, PRA and problems with their legs. - Caen Elegans, Ph.D. 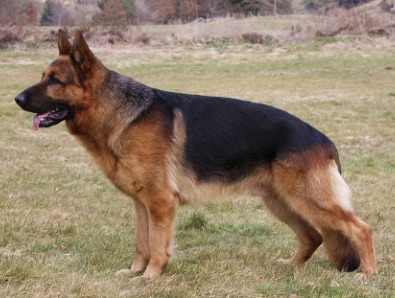 The German Shepherd Dog is also a breed that is routinely mentioned when people talk about ruined breeds; maybe because they used to be awesome. In Dogs of All Nations, the GSD is described as a medium-sized dog (25 kg /55 lb), this is a far cry from the angulated, barrel-chested, sloping back, ataxic, 85-pounders (38 kg) we are used to seeing in the conformation ring. There was a time when the GSD could clear a 2.5 meter (8.5 ft) wall; that time is long gone. - Caen Elegans, Ph.D.

The compromised physical ability and endurance in the GSD is exactly why the military now favors the Belgian Malinois, an agile dog that is naturally constructed.  We added a current top winner as an example of the progressive changes in the breed's topline (back), length of leg, and head carriage.

The Pug is another extreme brachycephalic breed and it has all the problems associated with that trait – high blood pressure, heart problems, low oxygenation, difficulty breathing, tendency to overheat, dentition problems, and skin fold dermatitis. The highly desirable double-curl tail is actually a genetic defect, in more serious forms it leads to paralysis. - Caen Elegans, Ph.D.

Once a noble working dog, the modern St. Bernard has been oversized, had it’s faced squished in, and bred for abundant skin. You will not see this type of dog working, they can’t handle it as they quickly overheat. The diseases include entropion, ectropion, Stockard’s paralysis, hemophilia, osteosarcoma, aphakia, fibrinogen deficiency.

It is unrealistic to expect any population to be free of genetic diseases but show breeders have intentionally selected for traits which result in diseases. Conformation breeders claim they are improving the breed and yet they are often the cause of these problems. If “improvement” in looks imposes a health burden then it is not a breed improvement..

No dog breed has ever been improved by the capricious and arbitrary decision that a shorter/longer/flatter/bigger/smaller/curlier “whatever” is better. Condemning a dog to a lifetime of suffering for the sake of looks is not an improvement; it is torture. - Caen Elegans, Ph.D. 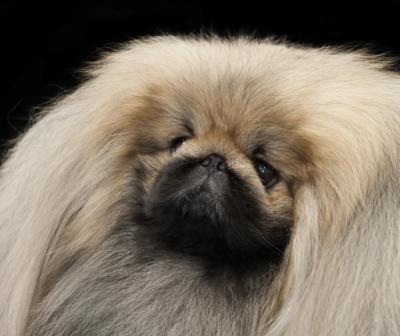 The breeder of the Pekingese on one of the videos below is highly respected and his lifelong devotion to the breed is unquestioned. We assume that he would prefer to show and win with a dog with no breathing problems and exercise intolerance. Most Pekingese would put dignity aside to romp with the kids but his restricted nostrils, immense coat, and malformed legs will not allow it.

In fact, the Peke's legs were deliberately misshapen so that he would stay close to his mistress (and collect her fleas).  “Let its forelegs be bent; so that it shall not desire to wander far, or leave the Imperial precincts.” said Her Imperial Majesty, Empress Dowager Cixi., photo Wikimedia Commons. 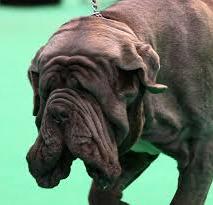 As new breeds come onto the show scene, one has to wonder if they could possibly have evolved that way?  The grotesque features that fascinate humans are linked to serious skin, orthopedic and health problems.

No animal in nature has sagging, wrinkled skin as is found in the Shar Pei, Neapolitan Mastiff, and the new addition to AKC show rings, the Dogue de Bordeaux pictured at right.

This hound is sad for many reasons. In addition to his huge, heavy, drop ears (which invite ear infection) his mouth is badly deformed.  He would love to be able to follow a rabbit track and bay with delight but due to our genetic interference, he can no longer do what he was bred to do. 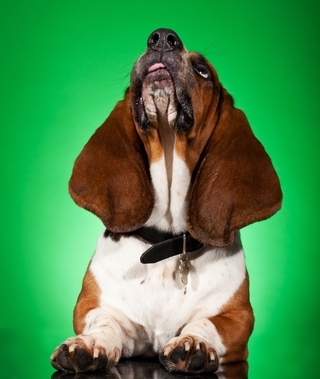 If you could see his eyes you would see only love and trust.  You can't see the painful exposed lower eyelids that collect dirt and debris or you would be ashamed for the breeders who malformed a once adept hunting dog into a conversation piece!

Surely, something you have seen here today will make you hold your best friend close and reassure him that his wellbeing is more precious than a room full of show trophies.

The Kennel Club (England) and the United Kennel club have put the ball in our court.  It is now up to all of us to persuade the American Kennel Club and the "Parent" Breed clubs that own the breed standards to modify them.

2018 update: this was written in 2014 and since that time, many prominent dog-writers have covered canine health problems and structural defects.

Some parent breed clubs have made an effort to educate members on the frailties of bad structure but egos and ribbons carry more weight. It is less about learning than about changing the sport and that would mean changing the human psyche.  We are drawn to exaggeration; bigger is better (unless it is a toy breed or sports car) and extremes get attention. 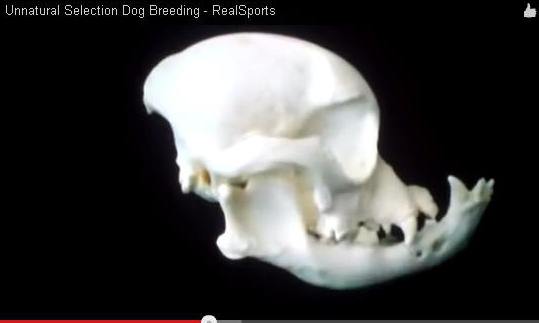 VIDEO clips of AKC guests on the Today Show trying to explain horrid puppy mills.  Then the Crufts Dog Show Secretary explains health goals and what is being accomplished in the U.K. and in the last video the owner of a English Ch. Bulldog owner goes over his dog point-by-point, demonstrating the progress already achieved.

Also see VIDEO of Crufts Dog Show (England's premier event) examples of outstanding dogs and those with what most viewers may consider as defects and deformities.

Click if you missed Part 1 of this three-part series; Health Defects In Purebred Dogs