How the public sees purebred dogs and how dog show judges have endangered the health, structure, and future of "pedigreed" breeds.

I sat down at the group ring next to a slender, strikingly attractive woman. Non-sporting came in and she watched the first go-around intently.  As the judge examined  the first dog, she turned to me, apologized for interrupting and asked if Poodles had hair pieces? I said yes, some….. most. She nodded "Yes, horses wear tail pieces and some have hair braided into the manes."  The light bulb went off. Of course she was a horsewoman. I asked what events. “Hunter-Jumpers and Gaited.” Do you show? I thought what a silly question that was as she replied “U.S. Equestrian Team.” Oh. 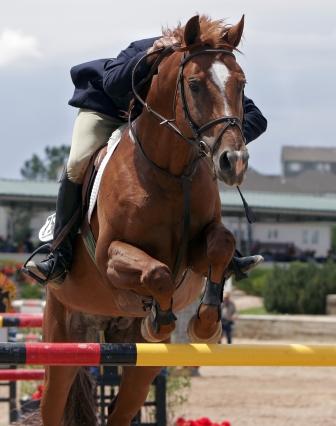 She explained that she held a Masters in Veterinary medicine and was doing a research paper on how man has damaged the horse's health through “selective breeding.” For once I kept my mouth shut and listened as she explained how breeders had changed the skeletal structure to the extent that certain bones were elongated while others had shortened with the result that the jumpers suffered more injuries. She said there was a movement to increase bone size and density but not proportion.

I told her I'd gone to a Tennessee Walker show and was shocked that most were so sickle-hocked they couldn't  walk normally.  She nodded, then observed "At least in horses, there's not such a disparity in body shape." I said what about the Clydesdale and Shetland pony?  She laughed but we agreed that there was much more dissimilarity of size and structure in dogs. As the next group came into the ring, we wound up discussing tails; how it changes the configuration of the rear quarters and spine in both species.

I asked her to send me a copy of her paper and she smiled, saying it would be very lengthy and technical. Well of course. She didn’t think dog owners would read it any more than horse people but that it was of interest in the scientific community. I understood..

She then made a profoundly true statement that applies to all animal judging. "Every judge must understand that what he or she puts up today will impact the breed tomorrow."  I agreed but explained that in our sport, judges usually blame breeders for physical extremes and faulty structure.  She raised a perfectly tweezed eyebrow and said that was "patently dishonest!"

Agreeing with her, I explained that in dog shows, if an extreme characteristic is consistently awarded, that is what breeders will strive to produce. She asked if that was what changed German Shepherd dogs?  I said if she meant the rear quarters, yes, breeders will take over-angulated dogs into the show ring because the side gait is so flashy.  She frowned but nodded so I plunged on stating "If an exaggerated virtue catches the judges’ eye, it will be eagerly sought by everyone and thus will become ingrained and normal."

"So you are saying that wonderful breed has taken another step towards becoming a caricature of the canine, similar to the Walkers you mentioned?"

Exactly! I explained that nature’s dog is high on leg, with strong but moderate bone, slightly rounded croup, tail carried level with spine but capable of flagging high when communicating. He's prick eared, with triangular shaped head and muzzle length adequate to grasp and hold prey. Legs are moderately angulated, set under the body, capable of trotting long distances or sprinting in a gallop fast enough to catch its prey.

She nodded towards the Non-Sporting lineup.  "So you're saying these dogs can all do that?"

I explained a bit about Group divisions and that hounds and the spitz type have probably changed the least over the last two centuries. She said she had "ridden to the hounds" but asked what "spitz" meant so I used the Chow as an example.  "Are they the only primitive show breeds?"  I had to think on that.  I mentioned the Basenji but she had never seen a real one.  She immediately agreed that some coursing breeds have changed little.  I told her about the newly discovered Carolina Dog (basically unmolested mutts) and she countered with the New Guinea “singing dog.”

Laughing, we turned back to the ring as the Working group entered.  She asked why the Chow wasn't in there with the Samoyed, Husky, etc.  I was embarrassed to admit I didn't know and vowed to look it up.  She left then, saying she had a long drive back to the farm.  I stayed ringside, making notes to myself during BIS judging.

Regarding why the Chow is in the Non-Sporting Group, I found no reasonable explanation.  Every valid account describes them as "working" and "guard" including Wikipedia.

It is clear that all wild or pariah dogs are sound, healthy, intelligent, free-whelping, and capable of doing the “job” for which they were created. Are we contributing to the extinction of purebred dogs?  Challenged by the encroachments of civilization, wild dogs still hunt, still reproduce without human help, and they survive successfully.  One example is the New York City coyotes which thrive in Central Park and drainage culverts!!!

I am not a geneticist, but when we look at our dog show rings with the educated eye of that veterinarian-horsewoman, it is a disturbing sight.  It is a beauty contest, I understand that.  Soundness is beautiful to me but make no mistake, the public is beginning to see something else.  When a purebred dog shies from a human hand, when it huffs and puffs around the ring, when it presents in a coat that requires constant combing or either is so weirdly constructed that we have to keep propping it up, and then the judge awards those oddities, the pet-seeking public looks in the paper for "free to a good home" ads!

Could Designer Dogs be man’s instinctual way of reaching out for a more “natural” and useful companion? Will the more diversified gene pool diminish some of the horrid genetic problems which affect today’s “high bred” dog

Perhaps, but is that the answer?  Can a bad gene like PRA become endemic in a breed, thus transferring into another breed with widespread heart defects, the result being blind dogs that don’t live long?  Can a breed with an elongated spine transmit that deformity to one with a normal back but exaggerated angulation, thus combining two devastating structural abnormalities?

So judges, the burden is where it belongs. On you. You asked for the job. You hold yourselves out to be experts in canine type, soundness, and efficiency of movement. You have a huge responsibility to the domestic dog because the ever widening scope of genetic abnormalities can and will permeate the species. Exhibitors look to you for approval and we bring you what we think will win.

So here's the deal.  Only you dog show judges can slow down the structural disintegration of the purebred dog. Judge by the Breed Standards because unless our astute readers say otherwise, there isn't a single one that requires a purebred dog to be crippled, blind, or unable to reproduce without human help. Will you make a public commitment below?

Breeders.  If I was wrong in 2006 and today's purebreds are sounder and healthier overall than shelter mutts, tell us about it!  Enter your comments...

YOUR OVERWHELMING RESPONSE is appreciated but we have closed this comment section. Read comments now.