If you love your dogs and country, see how traditional Islam threatens animal ownership and American customs more than Animal Rights laws!

TheDogPress.com received several queries about Muslim beliefs and effects on dog ownership in America.  One subscriber postulated that Islam has been successful in “imposing anti-dog dog religious beliefs on European society.” She said that is fundamental to Islam.  I looked it up.  According to Islamaqa.com, dogs are unclean and there is a “growing assertiveness of Muslims in Europe as they attempt to impose Islamic legal and religious norms on European society.” I learned Muslims have done quite well in the United Kingdom and other European countries. Islamic faith is considered “incompatible with Western Values” such as living with a dog in the house. Egypt is host to 80 million Muslims, mostly Sunnis. Egyptians once loved dogs, as evidenced by the Anabus (pictured) and birthplace of the Pharaoh Hound but things are changing.

As calendars turned over in 2014, Islamic and jihadists were the new buzzwords on TV. By definition Islam is a religion and a Muslim is a follower of the religion of Islam. To put that in context, a Christian is a follower of Christianity.

A Sighthound owner suggested that our writers were covering up the fact that the ethnicity “generally accepted as anti-dog is Muslim” equals nearly 10 million Muslims in the U.S. She said “how can you pretend to be the top dog publication and conceal this threat to dogs?” She patiently explained “Muslims even consider dogs as unclean.”

I’m glad the editor decided that reader was right. She said there’s a news story here and asked me to check it out.

I remember The Black Stallion was from Arabia, now called Saudi Arabia. The Saudis condemned the January attack against the Hebdo and the free press as a “cowardly terrorist attack” and since Arabia may have been one of the countries of origin for sight hounds such as the Sloughi and Saluki, I will exclude Arabs from this discussion on terrorists. I don't see how we exclude Iran even though some claim it is the Saluki’s original country. 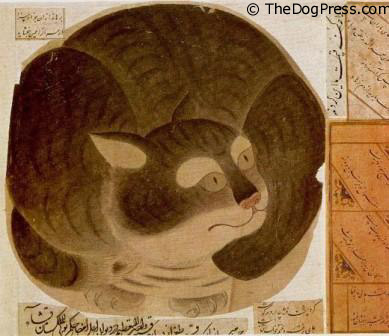 The Afghan Hound’s origin is of course Afghanistan which is also where some of the most ancient guarding breeds originated, in the Middle East. Turkey is famous for its Kangal and Akbash dog breeds and of course, the beautiful Turkish Van cat.

I hated watching U.S. Intelligence Chief James Clapper point out that Turkish permissiveness is aiding the jihadists. Teenagers who should be involved in Junior Handling (or going to cat shows) are deserting this country to join the Islamic terrorists, flying into Turkey to cross the border.

I went to the Pew Research Center and it says that 65 percent of Muslim-Americans are first-generation immigrants and most arrived in the last two decades. This matters because, according to Wikipedia “The majority of both Sunni and Shi'a Muslim jurists consider dogs to be ritually unclean. It is uncommon for practicing Muslims to have dogs as pets.” The middle east honors cats to some degree but not dogs.  As a cat fancier, you'll forgive me for pointing out that cats were domesticated before dogs.

Muhammad's attitude towards dogs is disturbing. He said that the company of dogs, except as helpers in hunting, herding, and home protection, voided a portion of a Muslim's good deeds. On the other hand, Muhammad advocated kindness to dogs and other animals. So the message is confusing and does not fit the purpose of dominating a dog-loving country like the U.S. Any dog owner, reading this, would defend their right to own a dog.

Muslim jihadists have not come to The Land Of The Free And The Brave to assimilate as have other ethnicities. Radical Islamists have been here for years but have not accepted our beliefs nor customs. One such example is the Somali cab driver in Minneapolis who made national headlines in 2007 when he refused to let a blind man bring his seeing-eye dog into his car.

To further define how Islam feels about dogs, according to Dogs In Islam, The Prophet said: "Whoever keeps a dog, his good deeds will decrease every day by one qeeraat (a unit of measurement), unless it is a dog for farming or herding." In another report, it is said: "... unless it is a dog for herding sheep, farming or hunting" and "Angels do not enter a house wherein there is a dog or an animate picture." 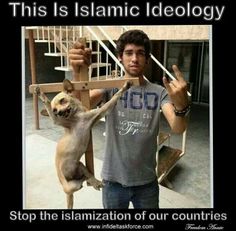 A hadith by Prophet Muhammad translates as: "If a dog licks the vessel of any one of you, let him throw away whatever was in it and wash it seven times." Because of this aversion and belief that dogs are dirty, most Muslims believe that a dog cannot coexist in a household with them. A dog's fur is also widely believed to be unclean. It would be common for a dog's fur to get on clothes and furniture. According to Arab American News, Muslims also believe that "hands need to immediately be washed after coming in contact with a dog.”

So, here we are, besieged by an insidious takeover of Animal Rights in the strongest nation on earth. Are we actually going to let another belief change American tradition? In this country “a dog for the kids” really means the kid in us adults. Do we give up the childlike belief in the God who heard our “goodnight prayers”? Do we shun the loyalty of our “best friend” for foreign political ideology?  Thanks but no thanks Islam.