NewsNips™ Dog Winners Around The World

From hound dogs for sport and food to show dogs in China and Slovakia and canine military heroes like Lucca, NewsNips celebrates our canine partners. 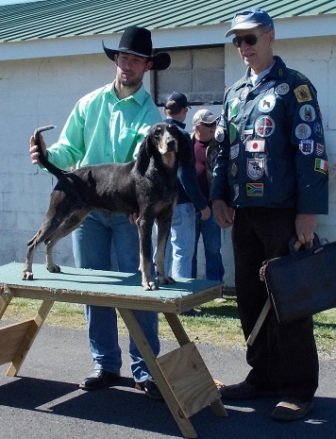 Coon Dogs also participated in various locations in the county on Friday, Saturday, and Sunday nights in "Night-hunts" which prove their ability to find, chase, and tree raccoons.

While the sport is as old as the American south itself, the `coons are not harmed in any way in these test competitions.

The aim of breeders is to produce dogs that have hunting ability and also are correct according to their breed Standards. The latter is tested in what are called Conformation Shows or "Bench Shows". 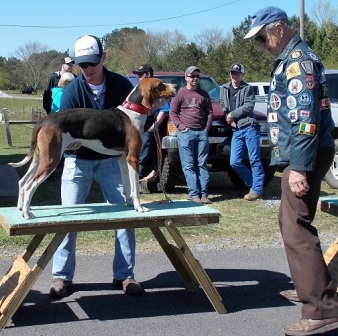 Best female and Best-In-Show was a Bluetick Hound owned by Andrew Couch of Cleveland NC and handled by Chris Blackmon of Dora, AL.

Fred Lanting was the judge. He has also been an AKC licensed breed judge for many decades and a world-renowned Schutzhund and German Shepherd Dog judge.  Club president Josh Kelly and secretary Kaleb Spann, both of Union Grove, are contacts for anyone interested in these breeds or the sport.

We are always excited to hear from our readers around the world.  Fred Lanting has been generous in sharing his insight on dog breeders, including his many judging assignments in the Muslim world. 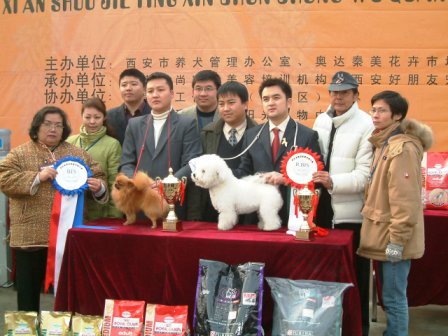 Show Dogs and friends in China.  TheDogPress.com has readers around the globe thanks to the initial development of the internet.  We were amazed to learn that the new internet was strictly censored by the Government of China.  TheDogPlace.org was one of the few "American" websites approved by the government.

Consequently,  one of our first contacts from China was Lana Tsan who later formed the China Kennel Club, served as the Quandong Millennium Show VP, and was the 2008 Olympics Committee organizer.

Lana was American-educated, a former NY Stock Exchange broker, but above all she was a "dog person".  She is shown here awarding winners at the first AKC system dog show in China.

Lana was a valued member of the NetPlaces Network Science and Advisory Board. The dog world lost a major contributor with her untimely death in 2011.

BEAUTY WINS AROUND THE WORLD.  This is a win photo sent to us from Katarina Schmiesterova in Slovakia (Central Europe).  Katarina is a veterinary student and young breeder of collies.

Unfortunately the judge was not named in the photo but she looks like an AKC judge.  Can anyone guess who she is?

TheDogPress appreciates the show reports from Australia and the Netherlands and we hope to receive photos in time for the next NewsNips edition. We also invite AKC and UKC show secretaries to send news and up to 3 photos of your hardest workers, show site, Puppy or Owner Handler group winner.

WINNING IS LOSING FOR THIS MILITARY DOG -  April 16th, the DailyMail-UK released this story about Lucky Lucca, the U.S. Marine Corps dog that lost her leg sniffing out explosive devises in Afghanistan.  Click above to get the whole story, one of courage and devotion to duty.

Lucca lost her leg but it didn't slow her down.  We love our dogs, pet or show but in these troubled times, we owe them for our safety and for protecting our soldiers and police, often with great sacrifice.

Lucca is a winner, one of our staunchest protectors "around the world."

As you travel to your next dog show event or whelp the litter that is part of your future, think of Lucky Lucca and her succession of handlers.  She served them all, out ahead, protecting them.  Protecting us.

Our military personnel, including canines, makes us safer.  So hug your dog and thank all dogs, around the world, for giving us their unreserved love and loyalty.