How has the freest nation on earth devolved into nightly rioting by thieves and thrill-seekers? Where are the police dogs and National Guard K9 units? 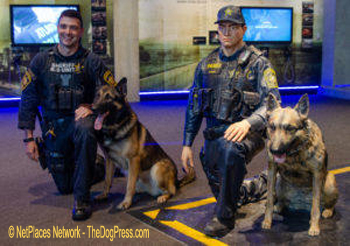 Col. Harper observed that most of these demonstrators must be slackers who sleep all day and riot all night. He said marching to gain civil or Constitutional Rights is part of American freedom but the initial riots were about “social mobbing and stealing.”

WHERE ARE THE POLICE DOGS??? Most police departments have a drug-sniffing dog but apparently it is politically incorrect to use the dogs that have so effectively discouraged violence?

Have you noticed that the police departments are not using one of the most effective and safest means of crowd control? It appears that crowd-control dogs have more devotion to duty than do law enforcement leaders!

Remember the Ferguson, MO riot? That seems to have been the turning point for effective crowd control. The Ferguson Police Department issued this statement: “In April of 2010… regarding the use of K-9 dogs… policy strictly forbids the use of K-9 to unlawfully intimidate or threaten subjects.”

Horses and/or dogs have been used to control people and deter violence for over a century. Not only are they effective to move people but we’re told that animals generally have a lower sensitivity to tear gases. In fact MWD (Military Working Dogs) are just one method of crowd control. Why weren’t they used in these 2020 riots?

Have our leaders become so politically correct that they are controlled by ‘proper protocol’ instead of the innate intelligence that got them elected?

Trained police and military dogs rarely make bad decisions but here’s proof that humanity has departed from many humans AND from most news reports. While headlines screamed about social injustice as the reason for riots, a 77-year old career law enforcement officer was shot and killed by the rioters.

Did you hear about that on TV? See YouTube video on hero-retired police officer.

The National Guard does have trained dogs in their arsenal of protection so why weren’t they used. See 90-second Police Dog Training-Crowd Control video.