We say Good-Bye to our dear friend, Joe Byer, who passed away at the age of 75 on April 28, 2019 after a courageous battle with small cell carcinoma. Born in Johnstown, PA on September 7, 1943,  Joe is survived by wife Cynthia Benyacko Byer, sister Susan Zahurak, and brother Kevin plus many nieces and nephews.

Joe will be missed by his family and the many friends he made on his journey in life, including his many dog owner friends.  Joe Byer lived an adventurous life... 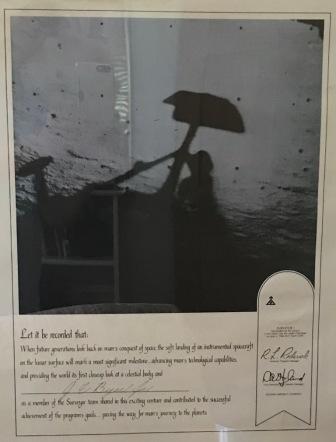 Traveling the world as a USAF surveyor, he moved to Los Angeles in the 60’s and worked for the aerospace industry where he contributed to a successful soft moon landing (click image left to enlarge in window). He also worked on the Viking Project which landed ships on Mars. His amazing memory and intellect made Joe a big winner in the 1976 TV show “Match Game”.

Joe returned to Johnstown where he met his wife, CinDee, they then move to Punxsutawney in 1985 where he worked as the vineyard manager for Wingate Vineyards.  Later, he worked as a morning show host for WPXZ, known as C.J. Obrien. He also wrote a weekly column for the Punxsutawney Spirit, called “Dog Knowlogy”.

His greatest love was working with his Dobermans and teaching others to train their dogs. Through those classes he developed many community projects working with the Gateway Humane Society, the Punxsutawney Central Fire Department and the Punxsutawney community center. He helped organized the first pet therapy in the Dubois-Jefferson County Area. Joe, like his Dobermans gave his all and never asked for anything in return and felt that his death was just another journey.

There will be no viewing as per Joe’s wishes. Arrangements are being made for a celebration of Joe’s life which will be held at Nekko’s restaurant in Punxsutawney. For more information contact 814-938-2669.

CinDee Byer provided this eulogy ~ Two and half year old EV climbed gently onto Joe’s bed, she pushed her head beneath his hand in hopes that he would pet her once again, and although Joe could feel her presence and knew she was there, he could no longer grasp her head in his hands, he could no longer throw her ball, he could not even speak or see her, but EV understood as she carefully laid her head beside him. 13-year-old Fever lay at the foot of the bed, neither dog making a sound.  By the next morning Joe was gone, he had passed silently into the night.

Joe was unbelievably courageous through his battle with cancer, like his stoic dogs he never complained. Joe refused all pain medication and even in his darkest hour he tried to be kind to everyone. He thanked everyone while he could speak and gave them a nod when he could not. He was humbled by their love and all those who worked with him in hospice were humbled by his graciousness.

Joe was my partner, I am here because of him. He was my friend with whom I shared my dark secrets. He was and will always be the love of my life. I have never met or will ever meet anyone so dedicated and passionate about his convictions as Joe Byer. He was never afraid to fight for what was right. My heart is broken. My memories are now of a wonderful life that I once knew. Take time to love and appreciate the one you love every day. Time goes by so quickly.

Read Life Lessons From A Hero and visit Joe and CinDee's Writers page for NetPlaces Network.