As a military strategist I would include trained attack dogs to protect our children from school shooters in conjunction with permitting teachers to be armed. What do you think?

You can comment below but before you go ballistic, here is a quote to consider, attack dogs “… have visual and olfactory sensory abilities that are literally superhuman, can go where a soldier cannot, and can often subdue or intimidate a foe more quickly with non-lethal force.” Ref #1 I did some research before risking my position. Wikipedia says “The dogs are trained to identify situations where humans are in danger and respond accordingly.” 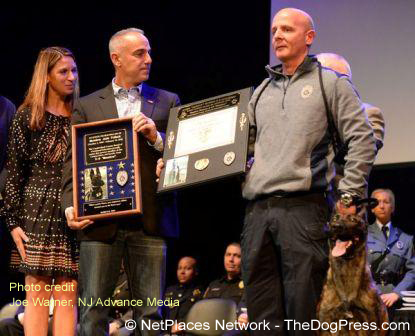 Bob Franken says they developed the security dog program in South Jersey but that it can be implemented everywhere. He sent me a photo of “Meadow” the first K-9 dog on patrol at a N.J. High School.

Andrew Packer, father of a Parkland School shooting victim, has an answer for parents who fear a fully trained dog and handler more than they fear a terrorist or an armed nutcase. He says recruit “off-duty police, retired military dog handlers, and local protection dog trainers who want to give back to the communities they live in.” Security dogs are already used in train terminals and could be implemented throughout the country, at schools, shopping centers, anywhere that is a potential (news-making) target.

School officials in South Jersey love the idea of training dogs to neutralize would-be school shooters. They pointed out that the nutcase at Parkland reloaded five times and if there had been a dog on duty, the killer would have been brought down before being able to repeatedly reload.

It takes 8 to 10 weeks to train a security dog to stop an active shooter. Training the “tactical way” through the program is 100% safe. Not only that, most children are soothed by the presence of a dog and a police officer. One of my officers who retired and went into the protection business told me about “Vapor Dogs” that are trained to smell gunpowder and go on the alert even before the first shot is fired.

None of us can forget the Parkland High School shooting in Florida February 14, 2018. Armed teachers may not have been able to prevent that attack but had someone been armed… It’s been 20 years since the shooting at the Columbine School in Colorado and our kids are still being attacked! There is no excuse for that. None. 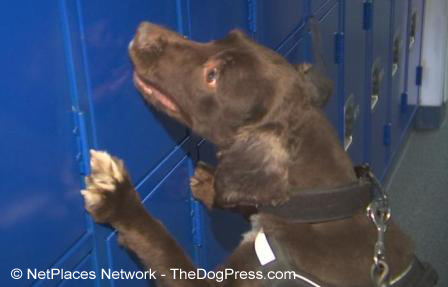 This dog is signaling in front of a locker which contains a gun. She can prevent a school shooting by I.D.ing a potential shooter through scent traces of gun powder. Just having a security dog on premises is a potent psychological deterrent, even to a nutcase. Killers may be deranged but they are not retarded and even disturbed people instinctively fear a trained security dog.

It has been proven that humans automatically react in terror at the sight of bared fangs. Instinct tells the assailant that dog is going to get him. Even if he’s a total nutcase, he’ll find out pretty quick that a fast-moving target is hard to hit. Trust me, he’ll either run or throw down his weapon and raise his arms to protect his life.  Worst case, say the assailant makes a lucky shot and stops the security dog, but in the meantime, that dog has given everyone else opportunity to run and hide.

You guys will agree that even an unarmed guard with a trained security dog offers a strong measure of protection for children and teachers. That kind of dog is capable of distinguishing between good people and potential threats. A gun cannot make that kind of distinction. Even my best combat veterans didn't have the psychological awareness of an animal.

I would like to know what you think about school protection. Would you prefer an armed law officer, an unarmed security guard, a trained security dog and handler, or none of the above? My daughter says I should include shopping center protection and I reckon she is right.  You can agree or disagree below. I think it is time we SEE the reality here at home and get our leaders to protect us instead of their cushy seats!