Wild carnivores never eat grain, not even in the stomach contents of herbivores, but today’s grain-free dog food marketing may be a HEART-felt disaster!

We should stipulate that in modern times grass-eaters are exposed to fields of wheat, corn, oats, etc. As their natural habitat gives way to mega-farms and suburban developments, deer have developed new tastes…

In July 2018, the FDA announced that it had begun investigating reports {Ref #1} of heart problems in dogs eating certain pet foods, many of which were labeled as "grain-free." We began to contact dog breeders for feedback and as anticipated, that led to this report.

Instead of wheat, oats and other grains, this new generation of dog foods contains a high proportion of potatoes, peas, lentils and other legume seeds (pulses) as main ingredients. In fact, vegetables were the first 10 ingredients, before vitamins and minerals. If you are scratching your head and wondering where the MEAT is listed, you will have to ask the profit-motivated marketing strategists.

You may remember mother insisting you “eat your vegetables” but we are omnivores (eats both plants and meat) whereas dogs are carnivores (meat eaters).

For the record, the “diets-and-canine-dilated-cardiomyopathy” report specifically “included breeds of dogs not previously known to have a genetic predisposition to the disease.” The report itself was a well-planned study by the “FDA’s Center for Veterinary Medicine (CVM) and the Veterinary Laboratory Investigation and Response Network.”

The conclusion drawn by Vet-LIRN was that “the potential association between diet and DCM in dogs is a complex scientific issue that may involve multiple factors.” The FDA received over 500 canine reports and even a few from cat owners.

As regards DCM, ii Canine dilated cardiomyopathy (Instant Info) cases often involved multiple dogs in the same household. We interpret that as significant due to the likelihood that they received the same brand of dog food. The American Veterinary Medical Association estimates there are 77 million dogs in the U.S. and notes that (most) dogs “… have been eating pet food without apparently developing DCM. It’s not known how commonly dogs develop DCM, but the increase in reports to FDA signal a potential increase in cases of DCM in dogs not genetically predisposed.”

AVMA also tells us “Dilated cardiomyopathy is recognized as a genetic condition in dogs, typically in large or giant breeds, such as the Doberman Pinscher, Great Dane, or the Irish Wolfhound.” Well that figures, the larger the breed the likely owners are to feed dry kibble dog food and less real meat. One other thing caught our attention.

Regarding taurine deficiency “It is believed to be less common in small and medium breed dogs. We suspect that cases are underreported because animals are typically treated symptomatically, and diagnostic testing and treatment can be complex and costly to owners.” Again, the smaller the pet, the more likely it is to be pampered with meat from the table. 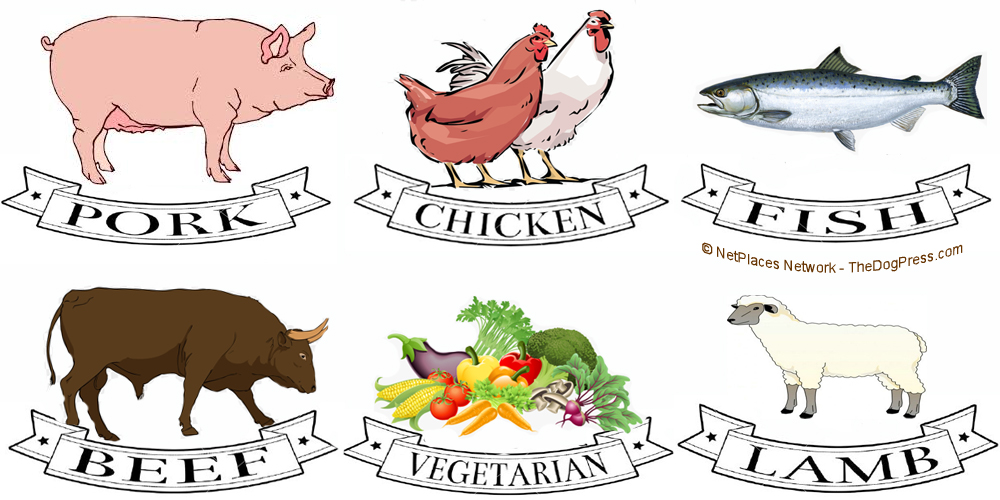 Because so many ‘grain-free products’ contain peas and/or lentils, common, cheap, and nutritious vegetables, over 90% of “grain-free” pet foods are based on those veggies and/or potatoes. Sweet potatoes are indeed nutritious, more so than regular white potatoes BUT VEGETABLES ARE NOT MEAT and dogs are carnivores.

For those conscientious owners who try their best to steer clear of grain-based pet foods, the FDA study noted “The most common proteins in the reported diets were chicken lamb and fish; however, some diets contain atypical protein sources such as kangaroo, bison or duck.” And it concluded “No one animal protein source was predominant.”

There is a point coming but first, this…

The primary protein in grain-free or limited grain products was of course, the cheapest and most available – chicken. Lamb was the most highly promoted replacement for chicken. The 3rd most common protein was salmon.

We found it notable that since 1990, when doctors and dieticians began advising more fish and dog food companies picked up on the cheaper and seemingly inexhaustible protein source, the price on farmed salmon increased almost 1,000%. Obviously, the price on wild-caught salmon soared even more.

Owners of Northern breed dogs understand that fish is their natural diet. If you can obtain affordable fresh fish do so but an alternative is canned mackerel. Be sure to drain the increasingly copious amount of briny water out of the can!