Ractopamine, a livestock growth hormone drug that is banned in 160 countries, has been used in livestock feed in the USA since 1999. 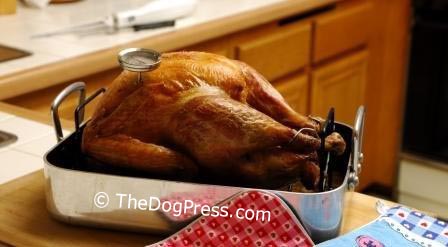 Openly touted as a growth hormone, ractopamine is a beta agonist mimicking stress hormones and it has been found in meat, turkey and dairy products which end up on your dinner table and in pet foods.

Estimates indicate that about 80% of livestock feeds contain ractopamine or some other form of this generic drug. These drugs promote faster growth and more weight gain but harmful side effects occur. There are claims of a lack of testing on the part of the FDA and in fact, turkeys from the USA were banned from import by Russia in 2013 due to ractopamine residue.

Both the FDA and the USDA consider turkeys to be poultry, and hormones were banned from use for raising poultry. Why did the FDA allow ractopamine, a growth hormone, to be an additive in turkey feed? Is this a big old mistake in favor of the pharmaceutical industry?? Could ractopamine be in other poultry feeds, such as chicken feed?

It is time for some truth from the chicken industry. The FDA states that no hormones are approved for poultry. There are reports that hormone use in chicken was banned in 1960. Yet a decade ago, many brands of chicken appeared to be about 4 times the normal size. Were these huge chickens illegally fed hormones? Are consumers expected to believe that chickens of such extraordinary size were developed in some normal breeding program? Where did they find a supersized chicken for that purpose? Recently, brands of normal sized chicken have been appearing on the market, after a decade of many brands of really big chickens. Consumers should be demanding to know why there is another change in the size of chickens!

Ractopamine and other growth hormone drugs have a devastating effect on livestock and on the incomes of many farmers and ranchers. The stress and side effects that accompany these drugs have affected livestock for the entirety of their lives. Horrible up to now, but it gets worse. We do not know how these dangerous drug residues have directly affected our health or the health of our dogs and cats. Could there be health problems that have not yet been identified? Could it be responsible for the upsurge in a particular disease in the human or pet population? It is certainly not likely that a doctor or a veterinarian would diagnose any symptoms in people or pets back to an additive in livestock feed.

No good has come from the use of growth hormones, acting as stress hormones, in farm animal feed. And no good has comes from keeping the public in the dark about the use!

But since none of this appears to register with Food and Drug Administration (FDA ), there are lawsuits in the works! Just as in the case of dog food companies during the melamine disaster, no one will care if someone sues the door shut to the FDA!

Worse than any drug marketed for use in swine food, Ractopamine causes the following problems for pigs:

But these were problems according to the FDA. Some farmers reported that the drug made their pigs so aggressive that they were afraid to go into the pens with them.  ii Ractopamine: Feed Lot Additive Pass-through.

I feed a raw diet to my cats and my first-hand experience with the pass-through effects of growth hormones such as ractopamine were that my cats became so aggressive I thought I was going to need a whip and a chair!

In addition to the aggressiveness, these frightening oddities indicate my cats were being affected in the same manner as livestock.

These radical effects in small cats can be extrapolated to large breed dogs so you can see the very real danger to children and adults alike.

The FDA required a warning on Paylean, a Ractopamine product from a division of Eli Lilly and Company, because the drug could increase the incidence of “downers”.

Pharmaceutical products as additives in livestock feed are plain and simple – DRUG ADDITIVES! Feeds containing drug additives should be labeled as such and include drug facts sheets listing all adverse reactions. Any human or pet food that may contain drug residue should carry a warning.

The contamination is so serious that that many countries have banned the import of USA produced meat. Those bans have impacted the American economy and directly hurt many pig and poultry farmers, and cattle ranchers. Let’s not think about how many farm animals were lost to death from the drugs. The drug companies made money off the feed companies, who in turn made money off the farmers and ranchers. “Organic” livestock feeds, if they existed, would be so costly that consumers couldn’t afford to eat meat. Where do these worthy American farmers and ranchers go for their profits when people stop eating the meat that they produce? The people who raise our meat and vegetable are the base of our economy. Are the drug companies and the FDA our friends or enemies? We should be thankful that some countries banned USA meats and called attention to this problem.

A new USDA livestock certification program enacted November, 2013 permits hormone free meat to be labeled “Never Fed Beta Agonists”. Since the term beta agonists appears to be a wide classification of drugs, readers need to know that refers to and includes growth hormone drugs such as Ractopamine and all its kindred drugs!

Consumers need to pressure pet food companies to use hormone-free meat and poultry. We want to see “Never Fed Beta Agonists” labels on pet food products, as well as meat packages, so that aware consumers can choose not to have their health and the health of their pets compromised by these harmful drugs.

It is time for consumers to force the drug companies to get out of the food chain!

Tell the farmers and ranchers, animal feed producers, FDA, USDA, prepared food industry, and pet food industry, that we do not want ractopamine drugs (neither generic or name brands, or any growth hormone) in the foods that we consume or that we feed to our pets. Say it louder by purchasing organic raised meat and poultry, or products labeled “Never Fed Beta Agonists” or “no growth hormones”.  Learn the difference between ii Natural, Holistic and Organic foods.

If chickens are a normal size, likely it is because growth hormones are not allowed to be used. If chickens are really big, then make a judgment call and do not buy them because abnormal growth patterns are suspicious. In addition, unless processors indicate that their chicken is not tumbled in a solution of Rosemary Extract and/or Green Tea Extract to kill microbes during processing, I can only vouch for Springer Mountain Farms chicken as a verified source that is free from those toxic plant extracts. And yes, their chickens are the smaller, normal sized chickens!