How to protect your family and pets in this revealing back-story on code and safety violations, criminal fraud and deadly pet food recalls.

Pentobartital has shown up again in another pet food. So, nothing was done to stop the root problem with the Evanger's problem. The problem was identified by the customer who had dog food tested!

Previously reported:  The toxic food that sickened and killed dogs was Evanger’s “Hunk of Beef”. Testing found Pentobarbital, a deadly drug used for euthanasia but its use in human executions had to be stopped because of the extreme burning and pain which required more drugs before the death of the criminal.

Here is what you should know about how ethics and management can change in pet food companies. Evanger’s has been owned by Holly and Joel Sher since 2002, and it appears that they are no strangers to problems despite claims that the company’s product recall was the first in 82 years!

On February 14, 2017 Instant Info ii Against The Grain recalled “Pulled Beef with Gravy Dinner for Dogs” due to the potential presence of pentobarbital. This trade name is owned by Chelsea and Brett Sher (the Sher’s twins), so production is at the family’s pet food plant which is still known as Evanger’s. This product was produced at least 6 months earlier than the toxic Evanger’s dog food, which was made between June 6 and June 13, 2016. On the same date, there was also a USDA “moved to archive notice” regarding a recall on December 12, 2016 for misbranded beef and this seemed odd as the recall was just 2 months old.

Since it was an issue with beef in the food supply, my radar was up so a closer look seemed like a good idea! This is from the text within the Food Safety and Inspection Service notice: “The problem was discovered on Dec. 5, 2016, when FSIS inspection personnel observed establishment employees removing the marks of inspection of the original beef suppliers and replacing them with the King Meat Services, Inc. (Est. 426) mark of inspection.”

The original mark was not identified and there was no mention of how long the activity affecting the dog food supply had been taking place. There was just the misbranding accusation. Photos of the boxes of recalled beef indicated prime cuts, so it was not originally headed for the pet food industry. However, after it became a recall, all 50,991 pounds would have been considered suitable for pet food. This is but one “prime” example of how our food safety system works but it gets worse… 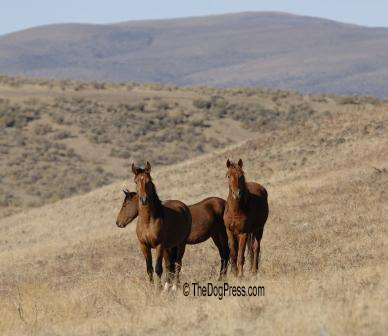 When it comes to ii pentobarbital tainted pet food, there are many things to consider, such as the fact that slaughter houses accept live animals, not dead ones. If cattle are unable to stand or walk (called downers) the animals are not slaughtered for human use. But since there appears to be an overabundance of wild horses in the West and the Board of Land Management (BLM) favors euthanasia, it would not be surprising if pentobarbital shows up in other pet foods. The FDA actually tested the pet foods from the Evanger's Pet Food Company and verified that it was beef. Perhaps the FDA may have been worried that it could have been horse meat, despite the fact that there has not been any news to indicate that the BLM has set anything into motion.

Evanger's states that they use only human grade meat, but according to the FDA, the bill of lading from Evanger's supplier indicated that the beef was "inedible and not for human consumption", even stating that the supplier did not have a grant of inspection from the USDA's Food Safety and Inspection Service. Meat sent to pet food companies does not have a requirement for this inspection. Maybe it is time for one!

Certainly it is time for transparency and accountability in the slaughtering, processing and rendering industries. We could be headed for another pet food disaster if euthanized horses can be passed off as safe pet food. Pet owners will not stand for a food disaster like the one with melamine. The problems I uncovered since Holly and Joel Sher bought the company serve as a warning to all pet owners.

Evanger's pet food company was started 1935 when Fred Evanger made a canned natural pet food for his champion Great Danes.

In 2002, Fred retired, selling his business to Holly and Joel Sher. Soon after, it was reported that employees rerouted gas lines, turned back meters, and rerouted electrical wiring to bypass meters, effectively allowing the new owners to run the processing operation free of utility charges. That was just the beginning. There were warnings from local law enforcement due to code violations such as being a public nuisance and causing offensive odors in the neighborhood. Failure to follow FDA food safety requirements to prevent botulism led to trouble for noncompliance, causing Evanger’s to need an emergency permit in order to continue operation of the manufacturing plant in 2008.

In 2010, Evanger’s received warning letters after testing indicated that a product labeled as lamb contained no lamb, but tested positive for beef. A second product labeled as grain-free duck was actually duck-free! The FDA considered this pet food to be adulterated. Owners of Evanger’s found themselves in real trouble when resentful employees, unpaid for overtime hours, exposed the crime of elimination of gas and electric charges, which allowed the company to steal almost 2 million dollars of utility services. This led to arrests and criminal charges for Holly and Joel Sher in 2010.

As of 2013, the case was still pending. It was even reported that Joel Sher tempted a witness with a $5,000 bribe. There is nothing to indicate that the couple got off scot free but it would seem that they have not yet paid for their alleged crimes! Does the old adage “if they will do one crime, they will do another” come to mind?

Since Holly Sher pointed out that this is Evanger’s first recall in 82 years, it seem fair to remind our readers that Holly and her husband Joel bought Fred Evanger’s respectable company in 2002, so in all fairness the credit for all the good years belongs to Fred! Claims by Evanger’s owners are that they have always used USA suppliers. But, we now know that at least one supplier in the wholesale trade has been caught “misbranding” meat!

Isn’t it time for the USDA/FSIS or the FDA to be zeroing in on the meat suppliers who may distribute mislabeled meat or meat meal containing the euthanasia drug that contaminated Evanger’s pet food and caused the fatality? It makes no sense that any lawful USA meat processor would be providing pentobarbital tainted meat, as there is no place in the food chain for it to go without causing sickness or death.

Drug residue and substances used in processing, such as the nutraceuticals to kill microbes, stay in the meat through the cooking process, causing many health and behavioral issues, so we sure don’t need meat with a euthanasia drug. As pet owners, we must demand that our food safety agencies become transparent when tests on pet foods, or even our own foods, turn up problems.

We must insist that these agencies Name the Poison, Name the Product, and Name the Country of Origin. It is just that simple! Make no mistake, the assurance of safe food for our families and pets is of vital importance. As I've reported in the past, ii counterfeit dog food has been a huge problem. See information on how to contact your government agency to report problems.

Consumers and members of the media with questions about the recall can contact Yu Sun, General Manager, King Meat Services, Inc., at (323) 835-8989.