Bloat can lead to agonizing death if not stopped quickly but years ago I found an over-the-counter product that deflates the gas which can lead to deadly torsion. 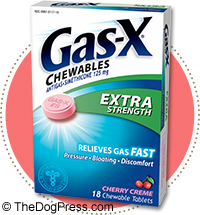 Bloating is not unusual in large breed dogs. Back in the 70s we learned with my Akitas what causes bloat but when my tiny Toy Fox Terrier, a nursing mother, began to bloat up on Christmas Eve I was desperate.

We are blessedly rural but that night the closest open emergency clinic was an hour away by winding mountain single lane road, dark dangerous night-driving. We tried burping her but it wasn't working. Then I remembered Gas-X. It was one of those “first aid” things we had always kept for our Akitas. I frantically searched the dog-room cabinets and finally found the box! It was years out of date and the tablets are for people, not a 6 pound dog.

No matter, I didn't hesitate, broke a tablet into quarters, wet it and popped a piece down the back of her throat.

I began burping her again, like you would a baby but with both hands on each side of her belly, working from loin to rib cage. It helps if you have someone to steady and hold the dog upright while you burp from behind. If you have a large breed stand the dog up against the wall, a fence or a friend (!) I never heard (or smelled) her belch but in little more than a minute she began to relax. When I set her down on the floor her belly was definitely smaller. I put her in with her puppies, they swarmed her and when she laid down to nurse them I cried with relief. We watched over her for another hour. She was fine. I was beat!

I tell you this because it was a lesson to me as regards “which breeds bloat.” It also brought home why toy dogs are less likely to bloat and potentially go into gastric torsion. 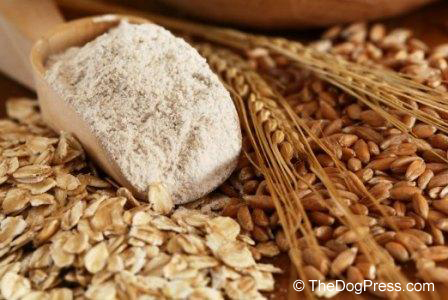 What happens when you soak dry kibble? It swells up.  It does the same thing in the dog’s stomach. When absorbing moisture, grains release gases - hydrogen, carbon dioxide and methane.

There’s another problem, especially with big dogs. The larger the breed, the more they tend to “wolf down” their food. Dogs are descended from wild carnivores and as such they are programmed to eat as much as they can as fast as they can… When dogs eat naturally they don’t nibble, they gulp down their food and in the process, they swallow air.

So why don’t coyotes or wolves bloat? The answer is simple. They don’t eat dog food. Wild carnivores eat meat, organ meats and digested vegetation in the prey's stomach and intestines first, then large chunks of muscle meat. Even feral city dogs find enough meat to survive but if one were to die from gastric torsion who would know?

So you get it. Nature is rarely wrong. Raw (or cooked) meat does not produce the gasses that cause bloat. Big breeds are more prone to bloat and deadly gastric torsion simply because they eat more grains and less meat than toy breed dogs.

This isn’t rocket science. Feeding smaller meals more often is good advice to prevent bloat but only if you understand that it is the type of food that causes gas. Even a small amount of the wrong food can produce enough gas to cause stomach distension which can lead to fatal gastric torsion. 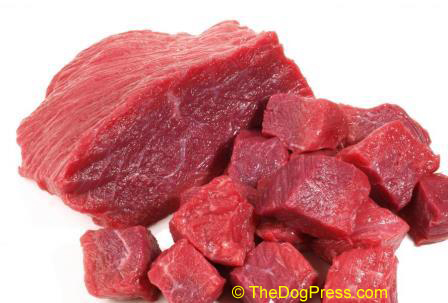 Sure it’s more expensive to feed big dogs meat. Our Akitas were big eaters! We scavenged slaughter houses back in the 70s and showing Quarter Horses kept us in touch with local ranchers. But by the turn of the century things had changed. Our breed got smaller (smile) and we found a great commercial source for raw beef and venison. So no matter where you live or what breed you have, with a little research you can find a local slaughter house that will sell deer, sheep, or horse meat or in some cases, raw beef “not for human consumption.”

No matter the size of your dogs, feed them the way nature intended. If you have a “northern” breed by all means include canned fish and let the veterinarian keep those thyroid pills… What about lamb? We have no access to it, probably because the dog food companies buy it all for those “lamb and rice” canine diets. The theory is that lambs haven’t lived long enough to be as polluted as adult sheep.

Organic? Costly! "Organic" pet foods are derived from animals certified to have been raised without use of antibiotics or growth hormones. But is organic corn, rice, wheat, etc. good for your dog? No. Are grains more likely to cause bloat? Yes.