Award-winning reporter reveals new information on how YOU can impact poultry processing, a hormone-free meat supply, and imported fish vs. U.S. seafood. 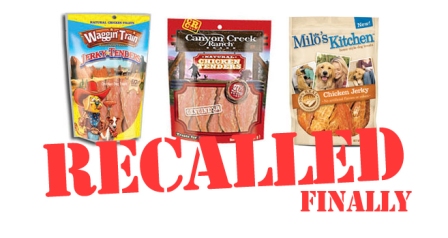 China ran over us with deadly Chicken Jerky Treats for dogs, big pharma overwhelmed us with ractopamine (a pass through drug from livestock into the food chain), and food scientists churned out toxic plant extracts to be used as antimicrobials on poultry and meat. The situation called for a pushy journalist, and turns out, I was the gal for the job!

I’ll share my successful tactics in hopes that they may inspire and motivate you to act.

Deadly Chinese Chicken Jerky Dog Treats. For 6 years nobody could stop these imports, but as a Congressional Hearing on Trade with China was about to begin, I fired off a FAX in May 2013, to Senator Sherrod Brown (Democrat/Ohio), sending copies to committee members. I included links to TheDogPress.com information and faxed copies of everything to committee members. Chicken Jerky treats are no longer coming from China! Thank you Senator Brown!

Contacting chicken processors brought little response, but Sanderson Farms Director of Sales assured me that they only used tap water. I bought their brand until it became apparent that the processor had started using plant extracts. Their chicken suddenly seemed too abundant and prices were dropping. It was time to warn the farmers, so in November 2014, I contacted Chicken Organizations and told them how chickens were being made toxic during processing.

I left an email query on the Springer Mountain Farms Chicken website. I was amazed when a reply came via USPS directly from the owner and CEO of the company, assuring me that his company did not use any extracts for killing microbes during processing, and that only chlorinated tap water is used in his processing and water chilling. I feed it to my cats and I eat it. I talked with meat department managers, giving one a copy of Springer Mountain Farms’ letter, as we had discussed the toxicity issue along with ractopamine. He frankly stated “THEY ALL KNOW THAT THEY HAVE A PROBLEM”.

In January 2014, I contacted cattle organizations about the phasing out of butchers in favor of total processing/packaging by meat packing companies, using plant extracts to extend the shelf life of cut meats. 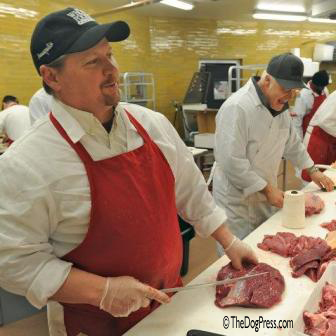 Soon stores had 4 or 5 butchers cutting meat right in view of the shoppers! With no indication of pressure from the FDA, it was clear that ranchers and farmers are the proper people to notify when their industry is impacted! An agriculture blog put me on to the trail of December 2014 USDA requirements, including labeling. See below:

NO HORMONES (pork or poultry): Hormones are not allowed in raising hogs or poultry. Therefore, the claim "no hormones added" cannot be used on the labels of pork or poultry unless it is followed by a statement that says "Federal regulations prohibit the use of hormones.

NO HORMONES (beef): The term "no hormones administered" may be approved for use on the label of beef products if sufficient documentation is provided to the Agency by the producer showing no hormones have been used in raising the animal.

Indications are that growth hormones are being phased out. USDA labeling policies appear to be solving extract and additive problems. Our economic base rests on the shoulders of the great Americans who raise our food supply. Thank you Ranchers and Farmers!

Have you thought about where your seafood comes from? Alaska and our NE shore are pristine waters with an abundance of fresh wild-caught healthy seafood but according to a July TV clip, our country's fishermen are struggling to feed their families. Why? Because we import cheap "fish" with names we never heard of from China and other countries.

Wouldn't you rather buy your fish, shrimp and lobster from the family boat owner who for generations has fished our waters with care and pride in what he does? Just one example: tilapia, a factory farmed fish from Africa, "contains high levels of arachidonic acid, an omega-6 fatty acid that, while necessary to help repair damaged body tissues, has been linked to brain disorders like Alzheimer’s disease and may exacerbate inflammation." This isn't news. It was a widely reported 2008 research study by Wake Forest University School of Medicine. This is just one example of why we should know where our food comes from so that we can make healthy, informed choices for our families, and our pets!

Help save COOL (Country Of Origin Labeling) {2}. The COOL Act was repealed in the House about the middle of June 2015 due to pressure from Canada and Mexico by way of the World Trade Organization. Write to your Senator. Do not let it pass in the Senate. (2 Don’t let other countries decide what we can or cannot know about our food supply. Support your local farmers and ranchers by buying USA produced foods. Buy meat and poultry that state Product of the USA labeled Natural, All Natural, or Certified Organic. One by one, we can stop or reduce unsafe ingredients, sources and contaminants in our food supply.