Editorial examines the impact of cluster shows, backers, handlers, higher show fees, legislation, and the new AKC. Breeders quitting, judges retiring, rules changing, costs soaring, entries down; is this the end of dog shows as we know them?

Our non-doggy friends talk about the end of the world in 2012.  Breeders talk about the present and the future of dog shows. The big show and breeding kennels are gone and the small hobby breeder-exhibitor is fading fast.  Without a backer, their best dogs can't succeed in the show ring; and threatened by legislation and no puppy sales, they can't afford to breed another litter!

Cluster shows make it more affordable but harder for the owner-handler to win because all the “biggies" come in clusters.  Long-time exhibitors hold onto pre-millennium memories and friends in the sport. They try not to bore novices with the good old days as they attempt to mentor the entitled generation because they want enthusiastic show homes for the "one more litter" they plan to breed. And so it goes.

With wrinkles comes wisdom, clearer vision, and the courage to speculate on the future. In this age, dogs must be “ranked” to prove their worth. How many remember when a dog could become a champion, win a notable share of Breeds in his area and be well appreciated by bitch owners? How about when we went to dog shows to win but also to compare and share breeding plans? If we drove over 500 miles it was for a two-day show or really special event, not for the judging panel.

When did it begin to feel like “been there, done that…”?  When we questioned such an expensive, time-consuming, all-encompassing hobby? Was it when competitors who used to be our friends morphed into the enemy? Was it when national ratings became the social standard of acceptability as compared to (gasp) being seen as a back yard breeder? Was it when judges began to readjust their concept of integrity in order to practice their craft?

Dog shows were invented to provide bragging rights and an opportunity to see other dogs and compare bloodlines. That was nearly two centuries ago. Will new age dog shows still be about our creativity and the compulsion to express it in a living masterpiece? Like any artist, what we do is more than just a hobby. Breeding dogs is an expression of our talent and public appreciation is an affirmation of that ability. It could be ticket or book sales but in our field, talent is now defined by who wins the most points for the year.

Most owners are just as happy to go for walks in the woods or sit quietly reading so long as they have a dog at their side. Many are fulfilled by doing rescue work, training service dogs, or enjoying Obedience. It is the artists among us who drive the sport, spending years conceiving, nurturing, and putting the finishing touches on a masterpiece.

Then we take it to a “juried” show. If our creative work doesn’t capture the judges’ attention, if it doesn’t sell; we’re finished. Some may struggle along, change agents, try a new style, but ultimately, when the kennel or studio is filled with worthless projects, we give it up. The difference is that our success is not defined by ardent collectors or ticket sales; we depend on dog show judges to affirm our creative talent. Some are themselves extraordinary talents; some are former wannabes and has-beens but either way, if they are not reasonably competent, honest, and unfettered in judging our work, the sport suffers.

Judging: There are deficiencies in any judging system but every struggling artist depends on the discerning judge, producer, or promoter who can recognize the extraordinary. These are professional people dedicated to being known as the best in the business. When they read a great manuscript or spot a future star at audition, they don’t have to ask themselves or anyone else whether it’s worth awarding. They make a living at recognizing greatness and are themselves judged by their reputation for so doing.

In our tiny world, there’s nothing so tangible as record sales or theater tickets to prove that a judge selected greatness. We have only to look at many “top winning” dogs to know that a system which worked in a smaller world when everyone knew everyone, no longer serves the sport and consequently, the great talents it contains.

Two examples of good judging stick in my mind. In the mid-60’s, I finished my very first show dog undefeated. Having shown performance horses for years, I wasn’t a total klutz but the wins weren’t due to handling skill. Anna was an outstanding bitch that went on to become the top Rottweiler dam in 1968, validating the opinion of six judges who recognized canine excellence and were free to award it.

In the 80’s Robert Finnie made a revealing comment as we waited for a BW photo. I apologized for my puppy’s silly behavior and thanked him for looking past that to her breed quality. He said something like “She was easy to find. I only judge working dogs and I try to do that well.” The puppy bitch he had just awarded was one of a litter of five puppies that became the first All-Champion litter of Akitas, and she became a "double" ROM dam.  Mr. Finnie had no crystal ball, knew nothing of the pedigree and we were total strangers; so he must have just been a great working dog judge who judged the dogs. 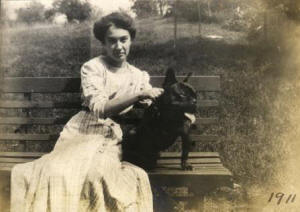 If those were “the good old days”, what happened? Are today’s judges more beholden to a host of influences that have nothing to do with their knowledge of or dedication to dogs? One judge told me it is harder to learn from her peers because most judges think they have no peers! I had to laugh as we agreed that too many become judges to gratify ego, social standing, or just because it’s the next rung on the dog game ladder.

Some say there are too many shows. Is that because match shows have been replaced by point shows? I'd say so, and that makes it grievously expensive for novice exhibitors and judges to learn.

Ratings: It's not just dog ads and ratings, clubs struggle to get bigger and bigger entries (read that as ratings) in order to afford bigger, better show sites. We used to be happy to tromp through cow patties and sandspurs, then pack up and move every day on the Florida Circuit. We got to see dogs from all over the country, we had good judging. At some point the January Circuit became more about judges choosing the right dogs in order to get another sunny winter vacation.

Show Fees? Today RV parking fees exceed those of a 5 Star Resort and entry fees have gone through the roof, discouraging all but the well-to-do and the pro handler. Speaking of which, handler fees have become status symbols, signifying who can afford whom. I have many handler friends who being objective, would agree that an owner-exhibitor can no longer win in some breeds and the average family can’t afford to hire a top handler. Then there’s stratospheric Veterinary fees caused by "pet insurance" which is a whole ’nother issue but one which has had a devastating impact on breeder costs.

All of these factors have changed a family sport, once open and affordable to all, into a playpen and pastime for the idle rich. Great ratings for televised dog shows do not mean viewers expect to participate any more than they dally with the notion of owing the Dallas Cowboys. The concept of showing a purebred dog is clearly unrealistic for most families. Mentioning the unmentionable, I’ll point out that as an income supplement for an animal loving family, having a litter of show puppies has less appeal, more strings attached, and is likely to bring in fewer dollars than will a Designer Dog litter. And confounding salability of purebreds, the Animal Rights groups have made adopting a shelter dog a nobler choice for most young people who seek to make a statement by eschewing an expensive purebred.

The inarguable truth is that today only the wealthy can really succeed in the AKC show ring and as the world becomes a smaller place, even winning a Group no longer has the same meaning as winning at the World Show, Westminster, or Eukanuba. It is indeed a new age for dog shows and for purebred dogs.

Is the future unchangeable?  Where is the logic in breeding show quality dogs?  Could (or should) a New Age AKC seek to recapture the essence of the sport? Would a two-tier system work to provide affordable, winnable shows for the owner-exhibitor? What can judges do to protect their ethics and regain the freedom to “just judge the dogs”? Could a smaller, less stressful venue in which to compare our efforts be the answer for hobbyists? Is a masterpiece of canine perfection as easy to recognize when it isn’t highly advertised and staged in glitz and glamour?

These are serious questions to which only you hold the answers. If you are more concerned with the future of our sport than whether we’ll be around on December 22, 2012, email your thoughts to Editor@TheDogPress.com and we’ll do a follow-up.

You may also enjoy Dog Show History, by Louis Fallon