TheDogPress made news again when libelous blow-back on our expose' of AKC’s registration software for pet shops exploded the AKC Delegates List.

The Delegates List is private communication. It was never intended to sink as low as chat lists but some will always abuse privilege and purpose.  This woman, whom we know, is out of sync with reality.  She must not know that TheDogPress readership comprises nearly half of the dog fancy. A high percentage of those subscribers are judges and delegates which is why we received a copy of her communication from several sources.

Regarding our coverage on AKC's Pet Shop Prime, the delegate-judge had this to say:

"TheDogPress" referred to in the message is a scurrilous publication sent via the internet - the editor or whatever she calls herself is a Barbara Andrews and the rag is always full of anti-AKC lies and fabrications. I have no idea who this "Michelle Runall" is but her last name should be "Runmouth".   It is to be hoped that messages such as this can be stopped. I, for one, do not want a lot of garbage fouling my inbox!

Interestingly, the offended person has been subscribed to HEADlines for 2 years and has never asked to be removed.  Perhaps she just likes to keep up with news she can’t get elsewhere.  After all, that is why politically interested people watch both CNN and Fox News.  They seek affirmation of their beliefs but they also want to know what the “other side” is reporting. The fact is, everyone is concerned about AKC's perceived betrayal over the PRIME software it developed and provided to pet shops.

I consulted my newspaper friends for a professional opinion on how to handle such libel.  Derek reminded me that the Milkovich v. Lorain Journal Co. decision in 1990 specifies a defamatory "opinion" if disproven, constitutes libel under most state laws. Dave said “Warn, expose and confront her”.  We did the latter... 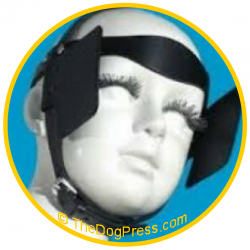 As the first professional news organization to report previously “unreportable” news to the dog fancy, TheDogPress adheres to AP and journalistic standards, reporting fact as fact and designating opinions as such. Controversial subjects are thought-provoking and stimulating.  As regards her statement that TheDogPress is “always full of anti-AKC lies and fabrications” it is malicious and easily proven untrue.

It may be that those who pander to AKC out of insecurity in the show-judging community don't want to read anything negative about the American Kennel Club.  Fair enough.  We all have friends whom we adore in spite of the blinders they wear.

Only the truth remains static.  Change is inevitable.  Whether it is beneficial depends on one’s perspective.  With over forty successful years in the sport, I say that anyone who believes the American Kennel Club’s direction over the last decade benefits purebred dogs is badly and sadly misinformed or perhaps they couldn't resist a super-sale on stupidity.

TheDogPress.com banked a lot on believing that the dog fancy appreciates being informed, even when good news is occasionally overshadowed by downright dismal news.  For example, the AKC Board Minutes were not previously published but in 1999, this publication changed that. AKC later made it easy to track motions and business "Highlights" but quit publishing anything except brief excerpts of Minutes as 2009 drew to a close. Publications must now have an inside source (known in the business as a pre-arranged leak) or they must peruse the entire minutes for a clue about what is really going on.

Even that doesn’t keep you really because there’s no record of a vote.  Further making AKC decisions unfathomable, some issues are decided in Executive Session, even when contrary to Roberts Rules.  We agree that some decisions are appropriately made in secrete but using the excuse that the competition might somehow benefit from knowing the general business of AKC stretches credibility.  The duty of the press is to inform the public.  That's what we do.

Of this you can be sure; The Dog Press wants only the best for the American Kennel Club.  We want the AKC to remain a leader totally devoted to purebred dogs.  Our concern is that AKC has become so obsessed with budgetary matters that the future of pure bred dogs as a sport for "everyone" has been jeopardized.

Unfortunately <big grin> no person associated with TheDogPress has any influence over AKC.  We don't make the news, we only report it.