I tip my hat to HSUS CEO Wayne Pacelle. He has moved the HSUS into the #1 spot as the nation’s most powerful organization soliciting money under the supposed pretext of helping animals.  To many, that's fraud, but apparently it is not criminal fraud under U.S. law and IRS tax code.

HSUS’s Wayne Pacelle is the most recognizable Animal Advocate on TV. He is the media’s talking head for animal (rights) welfare. Notably, “consultant” or “contributor” TV appearances are handsomely paid. Perhaps Pacelle donates his expertise. We’re not sure.

By comparison, no one, including AKC’s CEO Ron Menaker is seen or consulted. The significant result is that AKC has steadily lost registration income during the same period in which HSUS has grown like a cancer cell.

That happened because AKC's lost registration income from  long-time show breeders has not yet been offset by puppy mill registrations. I predict that will soon occur.

Compare the financial facts with HSUS's growing visibility on TV advocating for animal welfare (implying that AKC purebred dogs are raised in horrid conditions) coupled with PETA's strategy which says breeders kill animals and urges families to adopt from a shelter.

Wayne Pacelle and Ron Menaker are rumored to be, if not personal friends, at least respectful of each other. AKC seems to have borrowed the HSUS playbook and under Menaker's leadership, developed many of the marketing strategies that are employed by HSUS.

Pacelle is a brilliant manager and strategist. I might see his AKC counterpart as a dismal failure except for the fact that Menaker has kept AKC afloat through other financial strategies, even though many such financial finaglings are not well accepted by AKC traditionalists. Despite being an AKC judge, Menaker is either unaware of or ignores the basic concept on which his organization was founded. Pacelle does not.

Pacelle raises over a hundred million per year in donations. Menaker bleeds the foundation of AKC's existence with higher fees for less results. 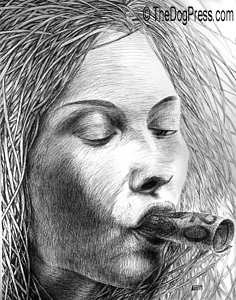 The American Kennel Club CEO's implementation of AKC credit cards, gadgets, toys, etc. and selling the name and endorsement of the organization generates untold $millions. And not to be outdone in the donation department, AKC created satellite non-profits to suck more money from dog lovers. The AKC/CHF is perhaps the best known due to honorable intent and unfortunately, recent scandal. There’s the AKC Museum and, borrowing from the HSUS playbook, the Disaster Fund.

Then, seizing the opportunity to capitalize (no pun intended) on the presidential election, AKC created a PAC (Political Action Committee). Menaker wants to represent all dogs and all dog owners. So does HSUS, except Pacelle makes it pretty clear that the last thing HSUS supports is purebred dog breeders. Ahh, now we're getting to the core differences between AKC and HSUS.

HSUS net income is significantly higher due to a much lower executive pay scale than AKC. According to a May 2008 report, AKC pays its CEO and Executives over twice as much as does HSUS. I leave you to ponder the implications of that fact. But don't despair for HSUS execs because they make millions from satellite companies.

Serious financial issues threaten AKC even as HSUS becomes richer and infinitely more powerful. Looking at the difference in how the two not-for-profit organizations spend income, we see that HSUS spends most of its income marketing, developing, and soliciting for yet more income from animal lovers. HSUS is the media's #1 source for facts, statistics, animal care, and animal related legislation.

HSUS is perceived as being for animals, loving and protecting them, etc. We know better but it is public perception that puts money in the till!

AKC touts itself as being "for dogs" but when it has incredible opportunity to nationally promote the purebred dog on Westminster and other well-rated TV broadcasts, the American Kennel Club forsakes its core constituency for dog food sponsorship showing mutts or for promoting an alleged "animal rights" humane society (AHA) and thereby alienating its core support. 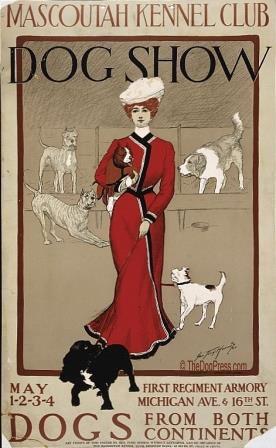 Where are the ads encouraging purebred dog ownership and the wholesome family competition known as "dog shows" which was in fact, the sole reason for AKC's formation?

In this publication, we examine the good and the bad about AKC. If we learn a little heavily on AKC's shortcomings, well, where else are you going to get that information? AKC has an excellent public relations staff whose job it is to dress everything up in tinsel, golden light, and a bit too much B.S. Our job is to balance that with thought-provoking commentary.

So how can AKC regain the confidence and support of show and hobby breeders? More to the point, does AKC want that market? Many feel we are just a thorn in AKC's side, an impediment to making the big bucks from the puppy mill market. There has been much angst on the AKC Board Of Directors over the loss of puppy mill income, or as it was so well sanitized and cleverly termed, High Volume Breeders.

Most long-time breeders, Judges, and dog clubs are still devoted to the American Kennel Club and what it once represented. Historically, the AKC has never had to advertise to the public; it was the only game in town and had no AR groups with which to contend. Times have changed!

HSUS now has vastly more support and public acceptance than does the AKC. HSUS now generates nearly double the income of AKC despite the required (non-voluntary) monetary support of breeders via registrations.

So what can show and hobby breeders do to support AKC? Offer a fair trade. They stay with the American Kennel Club and quit running off to other show and registry venues and in exchange AKC will support and advertise the purebred dog, the advantages of purebred dog ownership, and the family sport on which the AKC was once based.

The bottom line is this. With groups like HSUS and PETA better known and better funded than the American Kennel Club, we need to decide whether to cash in our chips or invest more to protect our stock (pun intended this time). The purebred dog fancy has no SEC or Federal government to bail us out and our existence is at risk!

Since this was published there's more recent information on the AKC Board Of Directors in these links. You may also want to catch up on the intrigue of the 2013 IRS Lois-Lerner Scandal as it relates to HSUS.

2014 Salaries and Other Compensations

2015 Salaries and Tax Filings not yet available