Who will inspect your kennel this year, AKC, HSUS, USDA, or APHIS? When those acronyms combine, it spells trouble for hobby and show breeders.

It began when APHIS, the USDA’s Animal Plant Health Inspection Services opened the door for HSUS as revealed on the Senate floor - see VIDEO and current news below. 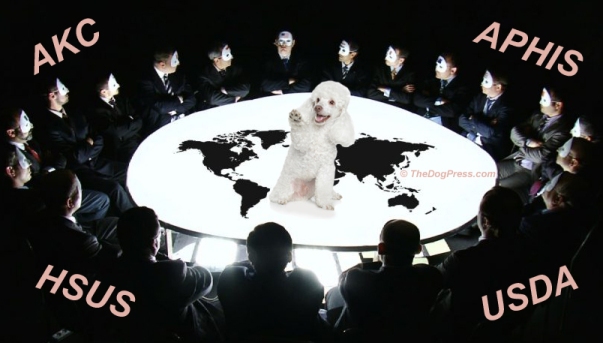 The Animal Welfare forum hosted by APHIS was described as a tax-payer funded platform “to provide the Humane Society of The United States a public forum to espouse its (views).”

The big question in 2011 was "Can AKC protect hobby and show breeders?"  The answer to that now appears to have been a resounding "No."  Perhaps the bigger question in 2014 is "WILL the ACK stand up for us?"  In 2005 TheDogPlace.org reported a potential collusion between HSUS and USDA to take over inspections of puppy mills and ultimately, private kennels. AKC was not excluded from the plan to start knocking on the doors of hobby dog breeders. It was (then) such an unfathomable concept as to receive only a mention but the seed has sprouted, fertilized by hundreds of millions of HSUS lobbying dollars.

The headline in FarmProgress.com called for an “End to USDA-HSUS Collusion” and the lead proclaimed “Senators and ag groups voice outrage over USDA-APHIS working with the Humane Society of the United States on an animal welfare forum.”

Chairman Don Nikodim spoke for all tax-payers “To use taxpayer dollars to give HSUS a public forum for their radical animal-rights agenda under the guise of a scientific forum undermines the very farmers that the USDA is supposed to be helping." 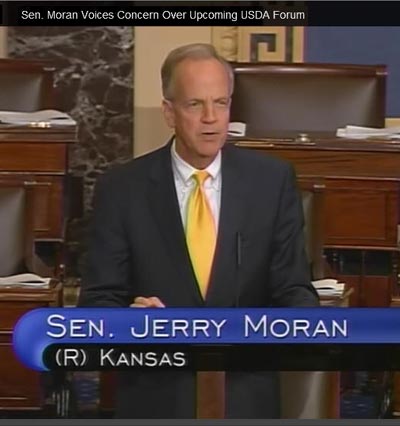 Watch the 6 minute video in VIDEO THEATER (below){2} of the speech delivered on the House floor by Kansas Senator Jerry Moran (R) in which he stated “USDA is catering to HSUS” by “precluding input from the agricultural community it is supposed to promote.” He sums up the collusion by stating “It is clear the Dept. Of Agriculture is catering to an outside organization instead of relying on the advice of animal scientists.”

In 2013 we learned more than we wanted to know about the organized infiltration of USDA/APHIS by former HSUS employees and members.

Does Senator Moran know that HSUS allocated less than 1% of its $148 million 2010 income to helping animals? We're not sure but we'll bet he knows about HSUS Lobbying ($$$) and that HSUS spent $24 million on fundraising, and almost $39 million on salaries, benefits, and pensions.

Only pennies of the $39 per month contributions{3} go towards helping animals. In fact, members of congress point out that their letters to IRS have brought no action even though “The members of Congress state the case this way, “We believe that HSUS’s own public documents show beyond question that lobbying is a ‘substantial part’ of its activities, and feel that IRS’s failure to act is attributable to the politically-sensitive nature of HSUS’s activities.” The Congressional leaders also stipulate “... lobbying not only is a substantial part of HSUS’s overall activities; it often appears to be the only reason for HSUS’s existence.”

This serious violation of IRS rules was pointed out in HSUS LOBBYGATE so why has there been no action? Some prosecutors might call this circumstantial evidence that HSUS has a size 13 foot in the government door.

We are also confronted with what may be an organized infiltration of USDA/APHIS by former HSUS employees and associates. For example, Ms. Sarah L. Conant was employed by the HSUS as a litigation attorney immediately before she was hired by APHIS to head a newly created office to focus on enforcement. Her credentials are impressive to those who watch Animal Rights law. There are numerous other examples of HSUS strategy to place thier people in key government positions.

The Dog Fancy cannot survive unless we unite and spend as much on legislative and marketing as we do on entry fees or dog food.

Mine for Gold in these Reference Links and visual links below:

How the intriguing web of HSUS Political Power in USDA, Pepsi, NFL, AKC affects YOU.

How Islamic beliefs are impacting dog owners in Europe and America.