AR activists use terrorist tactics to raise money for political power, stripping away human rights to own animals, from dog to horses to elephants!! 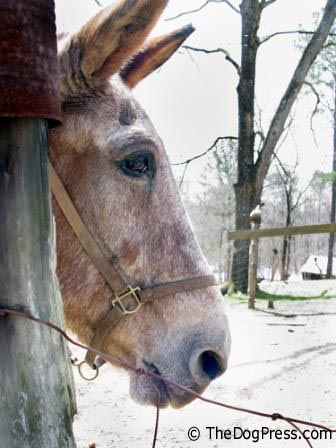 Equine slaughter. HSUS rightfully claims credit for closing the slaughter houses in 2004. All my horse friends say it was the WORST thing that has ever happened to horses. Horses, mules, even donkeys were dumped on the roadside because drought-stricken owners couldn’t feed them. Blooded horses sold at auction for $200 because in the depressed economy, no one was buying. Thanks to HSUS, there are no more U.S. slaughter houses and owners can’t even legally destroy their own elderly, sick, or starving horses. How kind is that?

Horses used to be legally slaughtered here to become dog food or to feed people in other countries. Now they are mercilessly trucked across the border to be inhumanely killed.  Why?  Because the Animal Rights activists don't understand the harm they do? Learn about ii Animal Rights Origin & History.

Or is it because they don't care as long as the tax-free donations keep rolling in?

Leg hold traps were a favorite “cause” with which to raise money. Fur trapping began with our ancestors and it will continue no matter how much money the Animal Rights terrorists raise by chanting animal cruelty.

Sure it’s cruel. So are feed lots, the production of veal and pork, and poultry farms. Are you vegan? Or do we talk out of both sides of our mouths?

Then there’s the Fur Industry. Gimme a break, you're talking to Quarter-Comanche.  Since prehistoric times man has valued fur for warmth and adornment but today we farm it. The inescapable fact is that animals raised in cramped cages die to make a fur coat but what the animal rights whackos ignore is that every part of that animal is refined to feed another animal, including the farm-raised fish we (and hypocritical animal cruelty crusaders) eat. Yeah, they don't eat meat.  Just meat-fed fish...

Indeed, there are great synthetic “furs” but does it really matter whether we kill an animal to eat it or wear it? If we decry the fur industry, we must not sit on that wonderful leather sofa or buy those expensive Italian shoes. 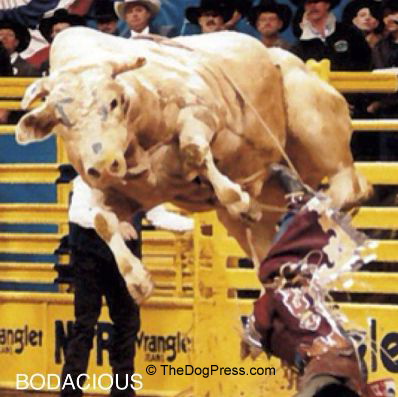 Cruel Rodeos. How many who chant the Animal Terrorist’s song have ever been to a rodeo? Ignorance is not bliss, it is stupidity because a good bucking horse is worth more than the average race horse! Bodacious, one of the greatest bucking bulls of all time, lived a life of luxury, was never successfully ridden (pity the cowboys who tried!) and today he is happily siring. How cruel is that? Sure, a failed bronc or bull is slaughtered, but abused? Never.  Rodeo bucking stock is carefully bred for that purpose.  Sort'a like the Angus steak on your plate.

As you are on your way to an 8 hour workday tomorrow, think how cruelly you are treated compared to rodeo stock that works less than four minutes per month!

Bodacious retired to a top bucking bull breeding facility.  That made him even happier than tossing cowboys into the dust!

And then there’s the Elephant Cruelty Circus Story {1}. I love elephants. One of my dearest friends is the elephant vet for the Atlanta zoo. We agree that elephants would rather be free but they are extremely valuable and with but few exceptions, for which an elephant may retaliate, circus elephants are not abused. Of course they chain elephants. How else would they keep them from wandering downtown?  Elephants have been tethered for centuries and were it not for elephants, there would be no teak wood harvested for your precious hall table.  There would be no Dumbo movies to entertain our children, but most of all, there would be no food and no economy for millions of people in India.

Killing a tusked cow and leaving her baby to starve is the crime nobody is talking about!  Instead, in 2015 the animal "rights" activists celebrated success for having forced the circus to kill or retire all elephants.  Surely a circus wouldn't euthanize a contrary elephant rather than provide feed and veterinary services for another 50 years?  Maybe you better skip the rest of this article because you still believe in Santa Klaus and Easter bunnies...

Of course there should be regulation on whaling. Whale Wars became a popular TV series but what “right” does an animal rights group have to stop the Eskimos from harvesting a beached whale or killing a seal to feed their families?  That has been a symbiotic relationship for thousands of years.  I'm against commercial whaling but when did the "animal rights" zealots acquire the right to change the natural order of Arctic life?

Make no mistake; PETA, HSUS, ELF and ALF seek to re-define the man-animal relationship into that which serves their subversive, money-making purpose. See War Games and Animal Rightists Power {2} for a chronological look at their success. The FBI lists ELF and ALF as top domestic terrorists. {3} So why do we pander to them? 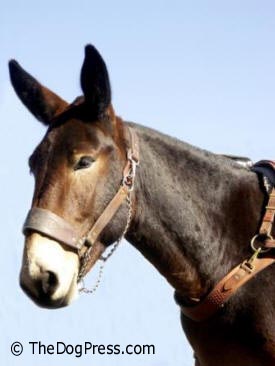 Since man first stood upright, he has “used” animals but the Animal Rights people use animals to wage war against the rights of human beings. For over 4,000 years, humans have cherished animals as beasts of burden, as war steeds, and as our friends. The Creator planned it that way. Who are the Animal Rightists to dispute that? A coyote can’t kill a rabbit to feed her family? Ants can’t keep and defend their aphids which provide milky nourishment for the ants?  Where did these people get their education?

The animal rights terrorists would rather we had lost WW1 than to have used mules to move our artillery and supplies. Those long-ears won freedom for millions of people.

OK, so some were overworked or went hungry right along with our soldiers.  And before that, mules, oxen, and draft horses pulled a million plows and wagons for American settlers.

Now animals serve a new purpose. They are used to strip away common sense and further the animal rights agenda! Think about this - PETA and HSUS get more press coverage than MADD (Mothers Against Drunk Drivers) or groups who work against child-abuse.

How cruel is that?