TheDogPress was taken to task for exposing John McCartney’s criminal molestation charges but our newspaper colleagues said “run it.” If you missed part 1, click here. 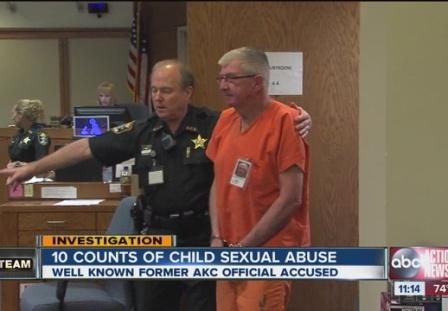 The courts will decide but in the meantime, our obligation is to the dog fancy. We willingly risk the wrath of a few in order to inform over 21,000 subscribers who expect news and information. Is it detrimental to the dog sport that the story was picked up by ABC News?  Not if it protects one child, and it will. The "photo" is from ABC's TV coverage of this case, see link below.

One thing is for sure, John McCartney serves as a warning for parents.

This publication cannot duck issues that adversely impact the dogs we love. Our writers and reporters will continue to expose the underside of the sport whether it is AKC’s PRIME Collusion with Pet Shops (public information) or Pedigree Fraud & Stud Book Corruption which, because we do not want to disillusion the public, is for Insiders only.

Families should know that showing dogs is not as wholesome as in days gone by. The world has changed. Parents were proud when their sons became altar boys, only to be horrified to learn what could happen.

The next edition will feature more examples of sickness in the sport, including allegations about certain judges. Why? Because shining a light in a dark corner makes the rats scurry away.

TheDogPress.com makes no judgment other than to select the most credible reports for publication. In one exchange of letters between the victim and AKC (signed by Darrell Hayes, at that time, Assistant Vice President Of Judges Operations), the American Kennel Club refused to act on the grounds that “there were no witnesses to the alleged misconduct.”

Bottom line? If you are going to be raped or molested make sure you have a witness handy.

TheDogPress honors the dog (see our Mission Statement) and the sport that keeps the purebred dog in the forefront of the public mind.

Our coverage on John McCartney was picked up by ABC News which we’re told is an ongoing investigation. See multiple molestation charges in Florida.

We have just received word that McCartney is out on bond paid by a former client.