Rescue groups transported animals to Houston shelters ahead of Hurricane Harvey but many people simply abandoned their pets and fled the storm’s path. 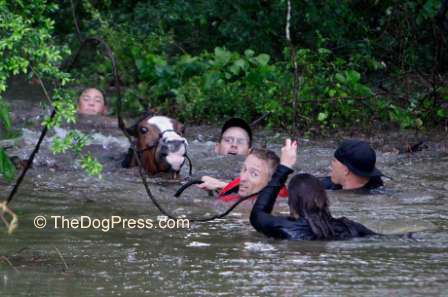 Coastal Texas and other Gulf states are accustomed to “weathering” hurricanes but not the record-setting rain and floods that came with Harvey – and stayed! By Sunday, many ranchers were forced to leave livestock to fend for themselves as they moved their families to higher ground. Others worked desperately to save their horses pastured near lakes and streams and in fact, many were able to get their families to higher ground on horseback. By Tuesday they were using horses to rescue other people.

Native-born Texans are resilient, “remember the Alamo”, get "instant information" on ii The Alamo.  But Harvey advanced with a deadly certainty that rivaled the Mexican army of 1836. Houston dominated TV screens and the nation watched as resourceful people came together.

We called Dave Dorsett, who lives in Austin.  He said local officials are calling it a Zombie hurricane. As it dies, Harvey is heading back into the Gulf where it will be reborn, turn around, and head back to Texas. Wednesday, it did exactly that and also had its "eye" on Louisiana. 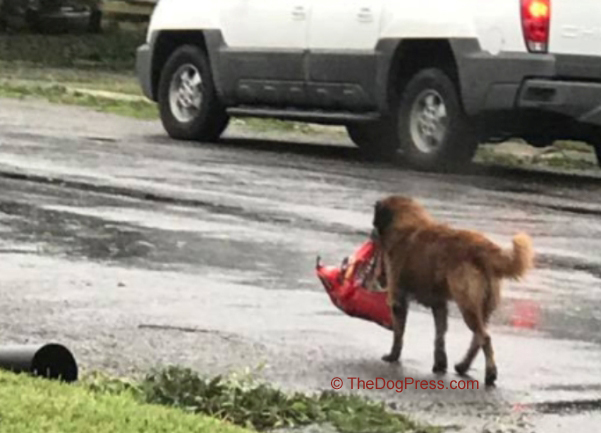 Dave reminded me that Houston is the 4th largest city in the U.S., larger than the state of New Jersey. There was thoughtful silence, then he laughed, saying people there are talking about the dog that Grandpa (who wouldn’t leave) was keeping family members. The dog left but took his dog food with him and by Tuesday this shot was on the wires.

Dorsett's company built shopping centers and he explained more than I wanted to know about “Hydrology.” Parts of Texas, like southern Florida, is sort of floating on water...

Monday many hotels and certain public transit systems relaxed pet restrictions as officials stressed taking pets when evacuating. Notably, the Chief of Police in Montgomery County Texas warned owners they faced arrest if they failed to follow warnings against leaving their animals no way to escape.

Even so, many people panicked and left their animals. As with Hurricane Katrina, there are always humans who disgrace the human race. Worse than abandonment, many dogs were left chained up or fenced with no escape.

When the water recedes, the horror we perpetrated on “pets” will be obvious.  But not the Houston Zoo.  They stacked sandbags and a skeleton crew hunkered down to stay with over 6,000 animals ranging from tiny birds to elephants.

Texas Governor Greg Abbott promptly activated the state National Guard but the problem is getting into flooded cities by boat. Over 10,000 Guardsmen are actively assisting in search and rescue work, from pontoon boats to helicopter rescue.  President Trump immediately ordered all resources to Texas. Shelters are many, well stocked and well run.

Late Monday evening, reporters interviewed one guy in a big 4-wheel truck who had hauled heavy equipment down from “high county”. When the camera crew asked “what will you do next?” the obviously exhausted man looked down at the reporter and said politely “get some sleep.” 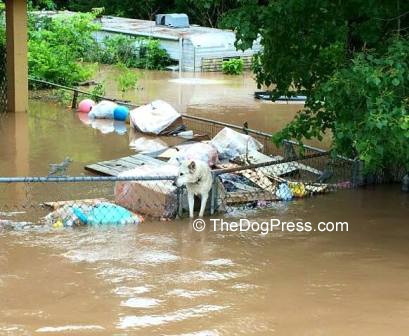 Whereas Louisiana officials were incompetent as regards evacuation (remember people on the bridges and the school busses that sat idle?), Texas was “right on it.”

They learned the hard way in Louisiana, and this time the Cajun Navy came to Texas - with jet skis, pontoon boats, broad shoulders and helping hands.  Valiant rescue workers were seen carrying dogs to safety when they could barely walk through chest-high water.

Legislation now requires authorities to include pets in existing federal guidelines for disaster planning. This according to Dick Green who is a senior director for the SPCA.

Help is pouring in from other states even as the flooded reservoirs top the dam wall to add to the 40 to 50” predicted. Entire neighborhoods are under water to the rooflines. Another friend in Texas called to report “what they are not saying is that the downtown office buildings can shift foundation due to extreme ground saturation penetration.” He said officials and networks are underestimating damage and rebuilding costs, either through lack of knowledge or because there are greater immediate concerns.

Our hearts and prayers go out to everyone.  There will be no repeat of the failures of Hurricane Katrina.  We ask everyone reading this to donate to the shelters below. We will follow up with them next week and also on Louisiana as Harvey turns his "eye" in that direction.  As judge/delegate Diane Albers said in the Hurricane Katrina report, "Hang Tight".