The clear chronology of hobby breeder betrayal will anger and intrigue you as AKC joins with DDAL and HSUS in support of PAWS legislation.

The dog fancy was stunned when AKC did the double-cross on the Pet Animal Welfare Statue (PAWS). After pretending to defend against PAWS, AKC suddenly deserted and joined ranks with the Humane Society Of The U.S. (HSUS) and the Doris Day Animal League (DDAL) in support of the anti-hobby breeder legislation.  The Cat Fancier’s Association (CFA), working with AKC to defeat PAWS, was stunned. 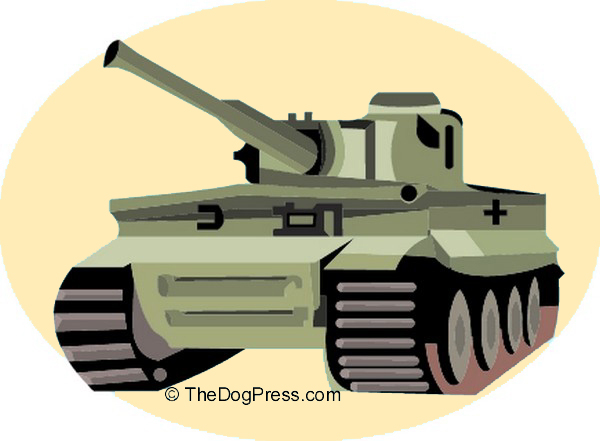 It was the ultimate war game treachery and the fancy rose up against AKC as had never before happened.

So AKC brought out heavy artillery, not against animal rights, no, it was to quell the opposition. The PR machine was let loose and key people in the fancy were pressured but for once, it didn’t work. In spite of AKC's support of influential politicians, the PEOPLE defeated PAWs!

A wised-up fancy had every reason to feel powerful but no one gloated. We just hugged our dogs and tried to forget what the American Kennel Club had done to us.

TheDogPress.com warned against complacency. We reminded readers that PAWS was but a stronger version of the previously defeated Animal Welfare Act (AWA) and the red herring  Puppy Protection Act (PPA). ref #1 The cognizant understood that we had vastly underestimated the animal rights strategy.

Having failed to capture the nation with PAWS ref #2 the Animal Rights army regrouped, examined their mistakes and looked at their options.

So, vastly more empowered and with donations pouring in, the Animal Rights Army concentrated its troops on a carefully selected target. California is the fourth largest economy in the world. It has a lot of politicians hungry for campaign contributions. AKC, the world’s largest dog registry, holds its Signature Show in Long Beach.

ref #3 The Golden State is the dog (and cat) show capitol of the world; thus the most significant place for animal terrorists to pull off a major coup!  CA 1634 ref #4 would virtually eliminate hobby breeders, insuring national success as it spread across the country.

The following chronology reveals a battle strategy unseen and unmatched in the history of the sport of dogs. Following defeat of the 2001 (Santorum-Whitfield) Animal Welfare Act (AWA) things quieted down a bit, but then…

June 4, 2005 - Bob Kane (SAOVA) noted “I was flabbergasted to learn that AKC personnel drafted extensive portions of this (PAWS) legislation.”

July 27, 2005 – With popularity plummeting, overwhelmed by letters, Santorum says he’ll “convene a hearing” for technical revisions to the PAWS bill.

November 8, 2005 Santorum sets up and chairs hearing for the Ag. Comm. Subcommittee. Among others, he invites AKC and HSUS to support his agenda.

June 2006 Santorum visits AKC corporate offices where he picks up $29,000 in contributions from the AKC board, with Chairman Ron Menaker coughing up $20,000.

October 2006 – TheDogPlace poll results - 93% of the dog fancy is adamantly opposed to PAWS.

Result: PAWS DIED in the 109th Congress and Senator Santorum was defeated in his senatorial reelection bid.

Summer 2007, Animal Rights armies conquered Albuquerque, Denver, and Louisville, moved on to hit hard in OH, NJ, and PA and HB 1634 passed the California Assembly and moved to the Senate!

AKC has kept the wraps on its strategy.  Hobby breeders don’t know the legislative score unless they subscribe to TheDogPress.com and belong to a list brave enough to reprint our sobering facts. Clubs are financially strapped, unable to mount an effective defense and can't do the marketing strategy which AKC refuses to do. 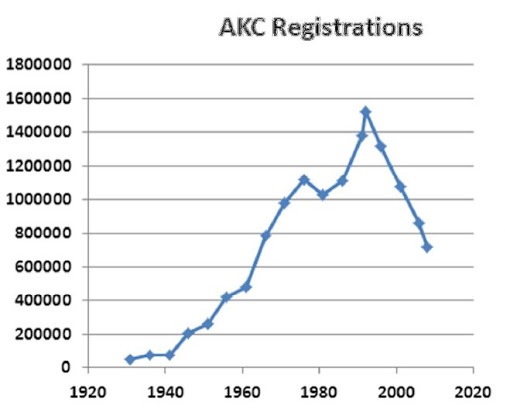 And now incredibly, AKC, competing for donation dollars, is asking the public to donate to its new Canine Legislation Department!

AKC Registrations Plummet - We have seen AKC registrations steadily decline marking the end of the era.  Show entries are dismally down and it isn’t just gas prices. Dog food companies did the only “marketing” for purebreds (AKC never has!) but now suddenly, they too are pushing shelter dogs. The public is turned off on purebreds, taking PETA's advice and adopting a mutt from a shelter.  AKC is pushing credit cards, pet insurance, puppy mill advertising, and selling its name for contradictory causes but still paying those presidential salaries and still raking in over $50 million per year from "other interests" and planning even more revenue streams.

AKC is preparing to announce formation of the AKC PAC, solicit more donations, and in violation of its own bylaws, push for acceptance of “crossbreds.”

Make no mistake - the pundits are wrong when they say we have never had to fight an enemy on our own soil. We fought for our right to own the breed of our choice but from shore to shore, Americans have lost that battle. Now we fight for a way of life; the right to make decisions about our own interests and hobbies, the right to be free of oppressive taxation, and the right to be fairly and honestly represented.

Can we win this animal rights terrorist war without AKC's support?  How are we doing so far?