Have the rights of dog owners advanced?  In the sport of dogs, freedom of the press signals our Independence, guarantees free speech, solid news, and protects the exchange of ideas.  Right? Wrong.  That was in 2005.  It is now July of 2016 and mainstream media has gone overboard, protecting treason, blasphemy, and moral sabotage under the guise of free speech.  It refers to a confessed killer as a “suspect” and the guilty walk free if their Constitutional or Civil "rights" are fractionally violated.

But dog owners still have no rights unless represented by legal counsel.

That's almost as confusing as our sport. We’re never sure which hat to wear on a given day. We're told “breeding creates unwanted dogs” at the same time AKC justifies puppy mills because “there not enough dogs to meet demand."

TheDogPlace.org, launched in 1998, has watched it all evolve.  From the beginning, it provided original content from credentialed people qualified to speak on a particular subject.  The Mission was/is to educate all dog owners, to help them train and care for their pets at less expense to the family and less risk to the dog.

But real, hard, current dog news was lacking.  There was another "news" publication but it was called "AKC's inside outhouse" which pretty well summed up the editorial direction.

So in 2002 TheDogPlace.org started Hot News which by early 2004, morphed into TheDogPress.com, the world's first digital dog news.  A prominent AKC judge said "TheDogPlace has had a puppy and it's sure to be a Winner!"  He was right because while dog show magazines avoid controversy rather than risk making advertisers uncomfortable TheDogPress.com deals with real issues.

Candid and inquisitive, TheDogPress.com listened to dog show judges who complained that they were being oppressed, censored, having problems communicating openly with each other, with AKC, and especially with exhibitors.

So in 2005 we visited with powerful leaders in the judging community including Lt. Col. Wallace Pede, founder of the Senior Conformation Judges Association Of America.  The result was TheJudgesPlace.com which broke new ground, bringing breeders, exhibitors, kennel clubs, and the judging community together in open discourse and education. 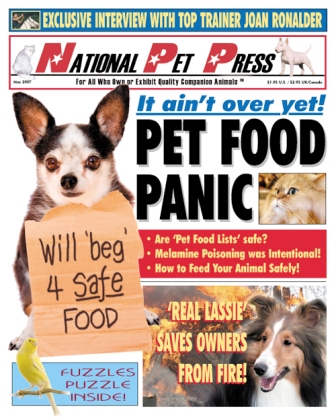 In 2007 we published The National Pet Press with two newspaper colleagues.  It was distributed through pet shops, news stands, and at the Crufts (England) and Westminster (NYC) dog shows.  When postage rates spiraled and digital publishing caught on, the full color newspaper was discontinued.

NetPlaces launched Central Communications a few years ago but social media exploded with lots of “fluff” and enough sour grapes to start a whinery.  We decided Yahoo and facebook could have that market.

So nothing's changed except we've grown.  Our editorial position is still about and for dogs. Our writers share information with journalistic integrity and substance.  The Science and Advisory Board makes sure it is real knowledge from real authorities, not worn-out reprints or financially-motivated “discoveries.”

Our writers deal delicately with how to be better players in a sport that is increasingly more about power, ego, and money than it is about dogs.  Private funding insures that our Mission stays focused.  We acknowledge the obvious - the sport is in trouble and that means dogs are in trouble. Shows are bigger than ever and lots of people are making tons of money but something is wrong. People feel it, even if they avoid thinking about it.

As regards the registries, our position is simple.  We have no wish to bite the hand that feeds us but neither do we cringe in fear of that hand.

We seek a unified front to protect the rights of dog owners. AKC has done a magnificent job getting free network coverage.  On the other hand, focus seems to have shifted to the pet market, and truly, there's money to be made there but what about purebred dogs?  UKC has excellent participation and with a strong background in “using” dogs, coverage of field events sparks a few televised events.  But one of our staff pointed out that the public still thinks PETA is wonderful and the “humane society” is grandma’s apple pie!

Our doggy network must survive because it presents an uncensored view of the real world and the dog sports' failure to confront it.

While show and hobby breeders weren't looking, puppy mills took over the pet market because AKC made them special deals, courted and coddled them for the mass registration income.

The American Kennel Club, a non-profit, tax-free entity, decreed we should quit using the term "puppy mills" and insisted we had to refer to them as "commercial breeders".  If you fell for that, then you believe PETA is about saving dogs.

Then, to insure and bind the pet shop market,  the AKC invented a computer program just for pet shops.  TheDogPress.com broke the story on the super-secret software PRIME.  It allows pet shops to register puppies "on the spot" for new owners, bypassing all that troublesome paperwork hobby breeders and their owners have to do.  Pedigrees?  Who knows which "blue slips" go with which litter?  Who cares?

What is AKC's justification for such in-your-fact support of puppy mills and pet shops?  Oh wait, you remember.  Hobby and show breeders are not able to meet demand.

Knowing the past and the realities of today, we trust you will help us celebrate America's freedom, including a future that includes dogs and our FREEDOM to own them!  Join us as we celebrate our Independence and our good fortune to live in this great nation. Anti-America, anti-religion, even the Constitution!