Bad vibes are something we strongly sense in 2018, like terminal threats to the rights of show and hobby dog breeders. 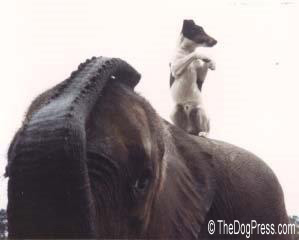 We have become a "divided nation". Terrorists walk our streets planting bombs that are thankfully discovered and disarmed.  For the most part, we never know about such threats to our freedom but we see what's happening elsewhere.

We feel uneasy.  We're not sure what it is but something is not quite right.

When the Indonesian tsunami swept people away in 2004, most animals had already followed the work elephants up the mountain to safer ground...  No mystery, elephants felt the tidal wave's approach through vibrations in their feet and unable to stop the tsunami, they headed for higher ground.

We call it “instinct” but UGA professor-SAAB member Dr. Richard Fayer-Hoskins{1}, is one of the world’s foremost authorities on pachyderms.  He explained that elephants left well ahead of the killer wave because they also “hear” low frequency sounds through their feet.

So let's look at vibrations. Dogs use other "frequencies" to communicate. You know that. You’re reading a book and distracted, you look up. Your dog is sitting quietly, watching you. “Okay, okay” you say as you get up to put her out. She didn't bark, she "thought" at you and unconsciously, you picked up her message.  That's because mammals communicate on a soundless frequency and savvy dog owners become "tuned in."

But for such a highly evolved species, our natural senses have become dulled. We rarely perceive vibrations or energy frequency, as proven by Royal Rife Technology, Dr. Hulda Clark, and other medical science pioneers. That doesn’t mean it isn’t there.

When I wrote this for ShowSight magazine nearly three years ago, North Korea was vibrating with nuclear tests even as we sent pallets of cash to Iraq.  Now as 2018 unfolds, North Korea has full nuclear capability and our president calls him "Rocket Man" to downplay a horrific situation.  Sanctions don't seem to bother the little man who thinks he's 12 feet tall. Our neighbors are stocking supplies (and more) and preparing for the worst.  There is serious risk that Rocket Man may instead, set off an EMP (Electro-Magnetic-Pulse), knocking out all electrical devices and services.  A prominent NC Congressman said it would be wise to have a safe room and stockpile prescriptions, first aid supplies, infant formula and food.

To that we would add dog meds and dog food.  We trust our leaders and have faith in our military even though many people have become uneasy about going to the local shopping mall. Yeah, its what us older folks used to call "bad vibes." So even as we focus on the next litter or dog show, we could use a little elephant sense when it comes to survival.  Seriously, we are but a microcosm of the world around us. Show entries are lower than they have been in decades. Handlers are feeling the crunch, magazine ads are shrinking, and breeders are sitting on litters planned before they realized how much the economy would impact dog sales.

It looks much better for 2018, the market is up, and jobs are coming back to America.  We hear that some of our AKC Delegates feel a negative energy flow but they shrug it off.  After all, they are not elephants. In fact, some of them are more like moles, turning a blind eye to the future of purebred dogs...

But if you open your mind you can feel the vibrations. I don’t know about Yoga, Meditation, or stuff like that but my Comanche grandmother’s blood runs strong in my veins. On the rare occasions when I am still, it’s amazing what I perceive. You should try it some time, like right now… that’s right; you can read and still free up your mind. It’s tricky but you can do it.

Do you feel the "bad vibes"?  If you look around, you might see some of us heading for higher ground. A metaphorical analogy of course… 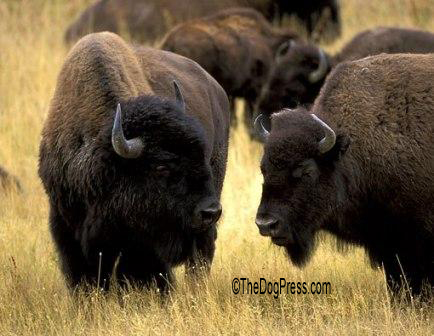 But here's the deal.  If we were as smart as a buffalo herd, we would begin to close ranks and move tail to tail, presenting an impenetrable wall of hard heads. Pun intended.

Go ahead, raise your eyebrows. You may be the one who ignored the rumbling, didn’t feel the vibrations and basked on the beach as the tsunami rolled in.

You sit there, reading this but thinking "What does this have to do with me or my dogs?"

Maybe I'm drinking something besides coffee this morning and there is really nothing to worry about.  No radical anti-animal legislators out there. No melting of AKC's Ivory Tower in NYC. No rumbling in Raleigh. The dog fancy hasn't shifted from helping newcomers develop a breeding program to demanding “Spay and Neuter” on everything we sell. No wonder registrations are down! We applaud the advancement of performance shows, not feeling the little quavers surrounding the conformation rings.

Coffee be damned! I’m dreaming. I saw my grandmother smile, gather her robes and move to higher ground.

Feel the vibrations and work together to protect our sport.  Get involved with your local kennel club, your legislative group and local politicians but above all, demand that the American Kennel Club return to its values and Mission Statement!  Oh, I forgot, they changed the Mission Statement (again) and no one noticed. Today's AKC is more about selling its name, products, and core values than about purebred dogs.

I don’t know about you but I’m feeling the rumble.  TheNetPlaces Network has told you about vibrations in HARP's EMF and the energy from Magnetic Fields And Ley Lines.  There's something not quite right.  Is the purebred dog in good hands?  Do you know who your leaders are?

Support the sport, support your political leaders, take pride in your nation and treasure the freedom and wherewithal to travel to dogs shows or training classes to socialize with friends who truly care about our "best friends."  Demand your ii Constitutional Rights and while you're doing that, demand Net Neutrality so you can continue to enjoy low-cost access to free sites such as the NetPlaces Network offers.

There was no one to fight for the buffalo.  Look what happened to them... In the blink of an eye they were just hides and horns.  Purebred dogs next??

For related articles and video information, dig for gold below

Are Dogs Today's Canaries? do new immune system diseases tell us something?

See For Yourself in HAARP: RAGE AND RUIN in Video Theater.  Playing now (free admission for dog owners), the CBC (Canada) on mind control weapons, the History Channel on HAARP and Soviet science, extraordinary "holes in the sky" plus scientists dissecting a porpoise burned to death by "flaming tornado" attributed to HAARP weather experimentation.