ROSEMARY IS A NEUROTOXIN

Does your new “natural” cat or dog food contain herbs such as rosemary extract, a neurotoxin that can cause neurological problems, seizures and anemia? 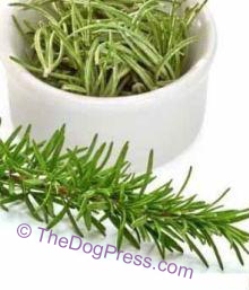 When Veterinarians reported that a particular pet food caused neurological problems in cats, testing found that one batch lacked Vitamin B1 (thiamine) but the real culprit in cat and dog food ingredients may be rosemary extract, a natural neurotoxin.

Adverse reactions, including seizures, or other symptoms may be delayed which complicates accurate diagnosis.  Seizures, allergies, and brain function problems are on the rise since pet food companies began adding rosemary extracts and other ingredients not meant for carnivores.  Very few veterinarians are aware that rosemary or other herbs present a danger.  Many vets don’t even realize that herbs have become a popular pet food ingredient.

According to Mombu.com/medicine, "ROSEMARY EXTRACT: Flavoring. PAE: illness. An ounce can cause death" (PAE indicates potential adverse affects).  We already know that rosemary extract can cause seizures in cats and small dogs, so it is possible that large dogs will also experience adverse effects depending on the ratio ingested.   Sadly, a vet may begin treatment for epilepsy without ever suspecting the real cause for seizures .  While Phenobarbital will control or reduce seizures, the animal continues to consume the ingredient and neurological damage continues.

Even though FDA considers most herbs GRAS (generally regarded as safe) Pet food companies should research any herbal extract intended as an ingredient in pet food. Holistic practitioners warn that herbal extracts, such as rosemary, sage, thyme, wormwood, dill, and mint, may be “mind-stimulating and “contributors to seizures” and note, they are referring to conditions brought about when these substances are ingested by susceptible humans, not by a dog or cat only a fraction of a human’s weight.

When “Natural” became a marketing buzzword in pet food after the 2007 melamine disaster many cat and dog food makers capitalized on the “natural food” concept by adding herbs, including rosemary extract, to their can and dog foods. Notably, holistic practitioners refer to herbal extracts such as rosemary, sage, thyme, wormwood, dill, and mint, as mind-stimulating contributors to seizures.

While a sprinkling of rosemary may be a healthy, delightful addition to spaghetti sauce, in certain forms, herbs can be anything but “healthy.”

According to the University of Maryland Medical Center{1} rosemary can interact with supplements, medications, and even other herbs. Most references for herbal use carry the caveat “herbal extracts should be used under the supervision of a healthcare practitioner.” There have been reports of allergic reactions due to their volatile oil content.

Reactions in humans include vomiting, spasms, coma and fluid in the lungs. Obviously the effect on a smaller animal such as a dog or cat could be much greater. 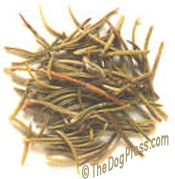 European researchers found that rosemary interferes with absorption of iron in the diet, resulting in anemia in humans. When pets are diagnosed with anemia, the cause is commonly diagnosed as flea bites. Few vets would relate anemia to rosemary extract in pet food so the anemic dog or cat is treated for fleas with a regime of dipping or oral flea prevention which may further affect the immune system.

UMMC states that rosemary oil (extract) should never be taken orally, so it makes no sense to add it to a pet food recipe. Their experts also said “Because rosemary has not been studied in children, it is not recommended for medicinal use in those under age 18.” That caution was for occasional medicinal use but when cat or dog foods contain rosemary extract, pets are ingesting it on a daily basis for months or years!

In addition to problems associated with rosemary in pet foods, there are many other questionable substances and ingredients in pet foods.  You know the problems with soy products but beware of newly created fiber additives (prebiotics), live bacteria (probiotics), waste products such as soybean hulls, and even dangerous levels of fluoride in many cat and dog foods.

The only good pet food is one that has been carefully researched!